I have just seen a copy of Nick Parry's e-mail, dated 28 Sep 2005, regarding his grandfather, Arthur Jewitt, who was deputy head in my days at PCGS. II was delighted to learn of the website and have just paid my first visit! What great memories it brings back!
I was at the school over the period September 1949 to June 1954. I was interested to see the panoramic photo taken in 1952 which not only includes my own boyish features but also many class mates and long-standing friends.
For my last year at school I was the Flight Sergeant of the Air Training Corps (1610 Squadron) with Flight Lieutenant Bernard J Cook (physics) as my CO and Flying Officer George Winter (biology) as my Adjutant. Lieutenant Colonel A Jewitt occasionally gave us talks on his experiences as an Inteligence Officer in the war, mostly explaining the techniques used in interrogation, with the occasional "case histories".
During my time in the cadets I was fortunate to be awarded an exchange visit to Sweden, and a Flying Scholarship which I completed successfully at Croydon Airport. I subsequently served 19 years as a pilot in the Royal Air Force before gaining the Air Transport Pilot's Licence. After serving as a Commercial Flying Instructor for a couple of years I joined Mission Aviation Fellowship for 19 years, flying in Ethiopia, Chad, Kenya and Tanzania.
I am now retired and living in Ripon, North Yorkshire, only a couple of miles from my brother Harold who was also at PCGS during the war years with my other brother, Fred, who died 10 years ago.
My main and most significant memory of school was the Christian Union. From a mere four fellows praying together every lunch-time in the French store cupboard, the CU grew over the years to the point that meetings had to be held in the library (and occasiuonally in the gym) with two "sittings" for each meeting: one for juniors and one for seniors. I am still in touch with some of the lads, not least Murray Mash who became my best man at my wedding in 1957 and whose eldest daughter later married my eldest son! We are, of course, still in touch! Among others I have met over the subsequent years are Graham Docwra, Rev Jim Baker, Rev Kestor Carruthers, Rev Dr John Balchin and (now deceased) Rev John Murray. Both Kestor and John were senior Army chaplains.
Thanks so much for instigating the website and I look forward to more frequent visits!
Yours sincerely,
Ron Collard
Posted by The Archive King at Tuesday, February 24, 2009 No comments: 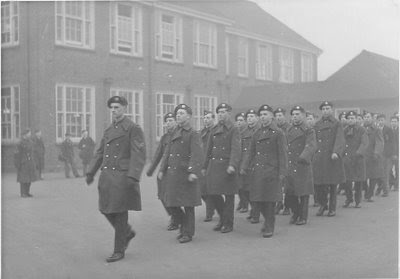 Interesting to see that despite the obvious winter chill, the large windows in the background are wide open. Presumably there may have been good cause if the chemistry lab was upstairs as it was in the 1960s, but why are they open in George Love's woodwork room downstairs? The fog seems to be closing in too, which reminded me of the occasion in late 1962 when fog (or was it smog?) prevented us going outside for games (yes!) and we found ourselves in the new physics lab watching that other doyen of the ATC, 'Beery' Cooke, trying to demonstrate lining up iron filings using an electro-magnet. It worked at first and would have continued to work had a boy (now on the 'guest list') not placed a compass point in one of the electric points on the benches and fused the circuit. After much head-scratching, Mr Cooke tried to repeat the experiment with the same results...again and again.... until it was realised that all was quiet in the rest of the building. Nobody had bothered to tell us that Dr Birchall had sent the rest of the school home early that afternoon because of the fog. But the fun we had that afternoon more than compensated. Standing recently in the same spot as the photographer brought it all back to me. Does anyone else remember the occasion?"


This was taken by Mr G D Watts BA, and shows B Flight of the Air Training Corps parading on the junior playground in the winter of 1953, with yours truly in the background, extreme left, giving the orders!
It is interesting to note that at least four future RAF officers appear in this picture: three pilots and one RAF Regiment. There is also a future Chief Technician physiotherapist and an RAF Policeman!
Dicky Hadlow, who heads the column, and Peter Galyer who leads the near file, both became Squadron Leaders. I actually flew with Dicky on 14 October 1971 when I was a staff Instructor at the Central Flying School and he was paying a return visit to what had been his previous posting prior to becoming a helicopter pilot.

click to see full sized
Posted by The Archive King at Monday, February 16, 2009 No comments: 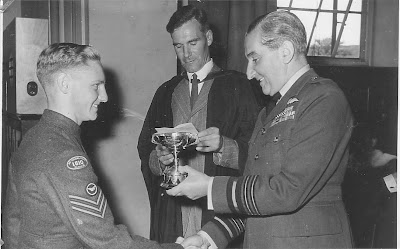 The picture, taken by the Croydon Times dated 22 July 1953 (copyright No 8028) is of me receiving the Sydney Black Trophy from Air Marshal Fogarty who was Dr Birchall's flying instructor many moons before! It so happend that Air Marshal Fogarty was the signatory for the Air Council on my commissioning scroll a couple of years later. Mr Jewitt is in the background.

More to come from Ron over the next week. 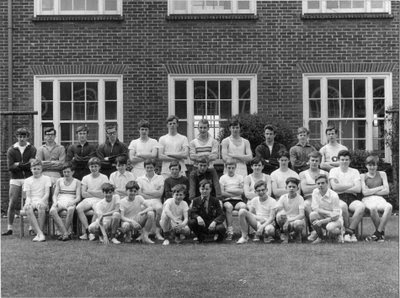 Can I add to Alan Girling's list? Couldn't recall the Buddy Holly glasses, but the other features of the guy in the back row brought it back to me - Peter Bennett, who was in my year but rather more of a scientist than I ever was. Nick Lloyd is next to Rob Walker, a good cricketer as well as an athlete. It's Andy Eustace rather than Peter Eustace, Andy played football for Holmesdale United for a number of years in the Croydon Sunday League, whilst Peter Eustace played for Sheffield Wednesday in the big league! T (Tess) Smith looked exactly like he did in '68 when I came across him at the 2007 Reunion, except that I was fooled by the beard which he never had in our school days. And is that a guy called Cogliatti on the far left with the shorty shorts? Clive Frampton (middle row, 2nd right) has introduced himself in the comments section of the Colts rugby photo. Glad that my hunch about Mick Giradot next to Clive seems to be correct. Front row, David Walker is 2nd right, and Richard or Howard Bird is 2nd left. Treadwell, Long, Berridge and John Hall also featured in the athletics that year, but I cannot place them in the photo.

And, on a topical subject, does anybody remember the school ever being closed because of the weather? Even in the winter of 1962/3, when the 1/- milk bottle drinks were frozen up for weeks on end, I cannot recall Basher Birchall giving us home leave, nor staff / boys failing to turn up, even from the depths of Limpsfield, Thornton Heath or Hitchin. Happy to write out 'I must have clean shoes at all times' x 100 if I'm wrong!


Alan Girling sends this note on the lost names:
"

I can help out with one or two names on the Athletics photo, as some were of my vintage. Here goes…. On the back row, extreme right, wearing the number 8, is Rob Walker. Rob joined in the 6th form and was a good all-round athlete. I recognise the one next to Rob but can’t put a name to him – it might come to me yet. Next to the lad with no name I think is a guy called Peter Eustace, though less than sure there. In the centre of the back row, with the hoops on his vest, is Warburton, who was also in my year. To his right (left as you look at the picture) is Peter (or is it Paul?) Smith. He was at the last PGS reunion. Third from the left on the back row is Ed Wilson (in the tracksuit top). Ed was a couple of years below me and we played together in the basketball team during my last year (my A level repercharge). Another good all-rounder, great left handed jump shot, I seem to recall. The guy next to Ed (also in the tracksuit top and with the Buddy Holly glasses – now that does show my age!) is another name that escapes me but I do remember that although he really didn’t look like a runner he used to win just about any long-distance race you care to mention, especially cross country. We used to think he was slightly bonkers but that view was tempered when he found out he used to win all the time

Moving to the middle row, right in the centre in the tracksuit is Chris France, I think. Another very good runner but more slightly built so looked the part as well. Strangely for one of quite small stature, Chris used to ride to school on a 650cc Triumph Bonneville, in the days when the UK not only had a motorcycle industry, this machine really led the way in all senses of the word. On the far right of the middle row is another face with a name that has gone, but next to him (and captain of the rugby photo in the latest update) is a guy called Frampton. I’m thinking his first name might have been Peter but I’m probably getting him mixed up with the singer of a few years back. Framps was a big bloke. Next to Framps is one of my year, Mick Giradot. Mick was good, no, excelled, at most sports. Winner of the Victor Ludorum on several occasions, he played rugby for , was a mainstay of the cricket team but gave it up for athletics. Also not a bad basketball player but lacked the height – strange because in the first form he must have been about 5 ft 9 and towered above us all. When he left he was about 5 ft 10 but had developed muscles in places where most of didn’t have places. I think he went to Loughborough and then became a PE teacher at a girls’ school. Wonder how much he had to pay for that….

I don’t know anyone in the front row, sorry.

Peter Richards writes: " Wotcha - I suspect we're not acquainted, as I left (on request) in 1967. I've scanned in a couple of pics - athletics team and colts rugby 1967 - I thought you might like them on site. The pratt in the red trunks splashing water all over a mountain stream in the Snowdon 1966 epic is likely me, Peter Richards. Ah well."

Eagle eyed readers may spot a pre-pubescent Nigel Bowles in the front row. This was the last time he was seen wearing a tie and blazer.
Posted by The Archive King at Monday, February 02, 2009 No comments: 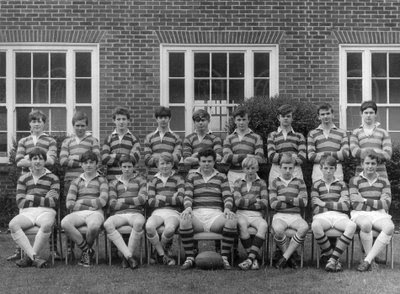 can you let me have the names?
Posted by The Archive King at Monday, February 02, 2009 1 comment: