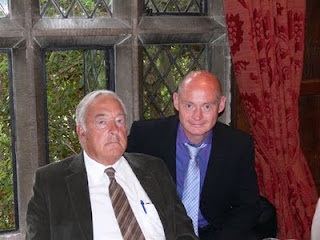 Below is a photo of two old boys.

John Lofthouse and I were talking at the wedding of a relation ( my wife’s brother’s daughter and John Lofthouse’s sister’s granddaughter – work that out !).

I mentioned that I lived in Warlingham for a long time and he said he went to a school not far away in Old Coulsdon. Surprise, surprise it was PGS.

John cannot remember too much about the school – he left in 1947. He may be on the school photo of the era.

Me – I have converted a barn in and am half retired after spending a long time in banking/computing. Haven’t done too badly since the first term at PGS looked like I was a fish out of water. I still have my report and keep meaning to burn it. I don’t want it falling into the wrong hands.

Currently I am semi retired. I have yet to decide what to do next now that we have moved down here.

I am still married to Janet ( 29 years and counting). Son Dr George is a research chemist in , Son Ben is a civil engineer working for his charterednessity ( remember charterism in history year 3 ???).

I view FASETPATRIA occasionally to see if there are any changes. Hopefully the mention of John may open a new thread for some of the OBs.

Say Hi to Paul Masters. We attended the same Infant and Junior schools and cub packs. Haven’t seen him since 1972.

Posted by The Archive King at Saturday, August 29, 2009 No comments:

More faces at the Cricket Dinner 09 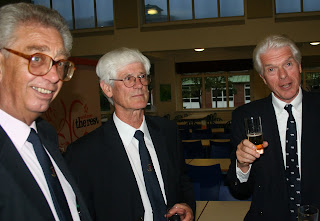 click the photo to see it full size.
Posted by The Archive King at Wednesday, August 26, 2009 No comments:

More faces at the Cricket Dinner 09 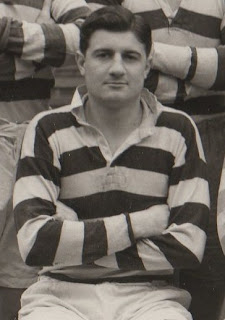 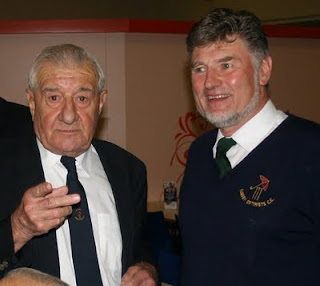 Eagle eyed readers may have noticed a youthful John Hanson bottom left in the 1953 Rugby Photo below. Here he is looking on very good form with an equally youthful David Shepherd ( Headboy 1964 ). Photo taken July 30 2009.
Posted by The Archive King at Friday, August 14, 2009 No comments:

More from the Meadows Smith archives 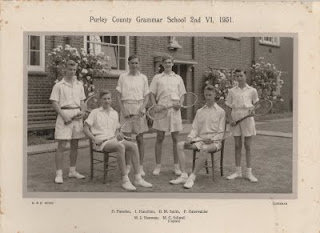 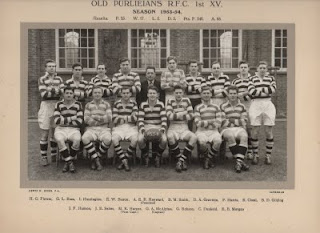 click the photo to see it full size.
Posted by The Archive King at Monday, August 10, 2009 No comments:

Posted by The Archive King at Thursday, August 06, 2009 No comments: 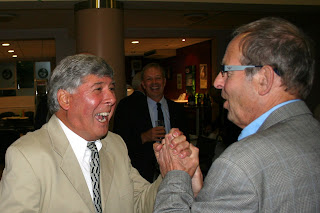 In the summer of 1950 the 1st XI were having a good season and the cricket master, Arthur Jewitt, decided to organise a cricket tour to Worcester. 12 players were taken along with Jack Taffy Williams. Thus was born the Worcester Tour - to this day it continues. John Asquith was on that first tour and last week he gave a wonderful speech that celebrated the 60th Anniversary. That speech should be on this site in a few days with more photos.
Another reason to celebrate was the presence of Peter Yorke, former Woodwork Teacher and Cricket master at Purley. Peter suffered a stroke 10 years ago but has staged a wonderful recovery.
Here Peter is meeting up with Old Boy, Mike Greensmith.
Posted by The Archive King at Tuesday, August 04, 2009 No comments: