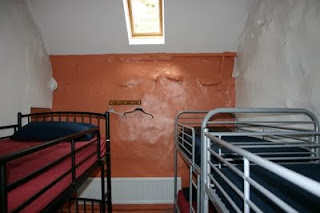 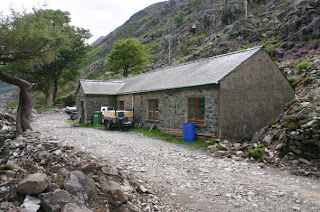 A few pictures from the facebook page of Bens Cottage.

Ed's note - in my day the only radiator there was in the school bus.
Posted by The Archive King at Sunday, September 20, 2009 No comments:

John Gregory writes " There is a facebook group called Bens Bunkhouse and website too.
www.bensbunkhouse.co.uk. I joined the facebook group. I will send the same article to Rob Booth who runs Ben's Bunkhouse."

My memories of Bens began in the early 1970. I recall the famous green door and window shutters, collecting water from a steel tank at the top of the ramp up to Bens. I remember walking to Nant Peris to Mrs Williams general stores to buy Mr Kipling apple pies. Bens will always have a very special place for me. When my parents couldn’t find me at Bens I was invariably outside just a little way up the rocks running up behind Bens. I am delighted to see that Bens lives on, now as Bens Bunkhouse. The nameplate Bens still sits above the door.

The tale begins in the autumn of 1953 when the first Purley Grammar School took a trip to Snowdonia ...the rest continues when you click this link - -- BENS COTTAGE HISTORY

Posted by The Archive King at Sunday, September 20, 2009 No comments: 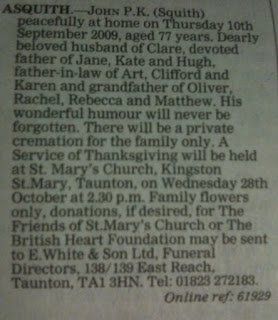 Full name John Patrick Kenyon Asquith
Born February 1, 1932, Carshalton, Surrey
Major teams Cambridge University
Batting style Right-hand bat
Fielding position Wicketkeeper
Bowling averages
Career statistics
Profile
John Asquith was a wicketkeeper with few pretensions as a batsman, and his opportunities in 1953 and 1955 came about when Cambridge's first-choice keepers were absent and injured. He kept against the Australians in 1953 and the Pakistanis in the following summer.
Asquith had more success on the rugby field where he won a Blue in 1953 and then he went on the play for Moseley and the Midlands. A teacher by profession, in 1964 he became the first headmaster of Cawston School in Norfolk, a position he held for 22 years.
Posted by The Archive King at Tuesday, September 15, 2009 No comments:

Jane, John Asquith's daughter has written -
"Thanks for the kind comments. I am John's daughter, Jane. We are all very sad to have lost such a special man. We are having a private family funeral on Thursday 17th September but there will be a Service of Thanksgiving on Wednesday 28th October at 2.30pm at St Mary's church, Kingston St Mary, Somerset to which everyone who knew him would be very welcome."

Posted by The Archive King at Sunday, September 13, 2009 No comments:

It is with great sadness to report the death of John "JPK" Asquith. Known univerally as JPK or Skipper. His initials stood for John Patrick Kenyon. Anyone who met John was always impressed by his wonderful manner and great humour. He will be missed immensely. John was Head Boy in 1948 and was awarded his Cambridge Blue for Rugby. He also played Cricket and Tennis for the University. He excelled in all sports and played against the Australian Cricket Tourists in 1954. He played 5 First Class innings.

Details of his funeral and a full obituary will follow.

From the University Archives are 2 previously unseen JPKA notes below.

John stands in the back row 4th from the left. 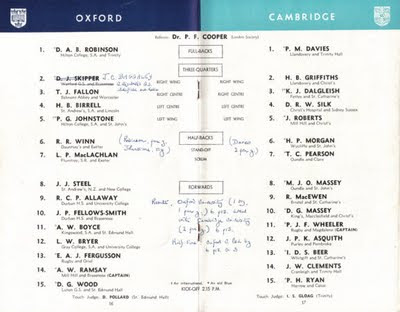 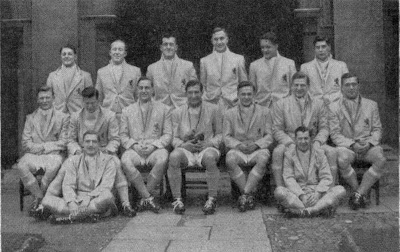 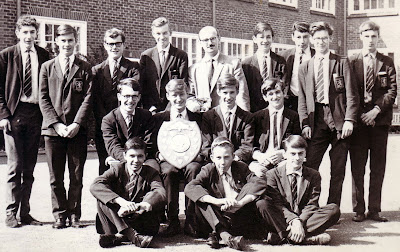 "I'm delighted to have picked up a contact with Purley. I was in the staff photo in 1960, which I still have and can probably send you. I asked to take the 5th Remove and have a photo of them too. My friends McIntyre and Holcombe helped with the Snowdon project from the beginning. I'll keep in touch.

Ed's Note - if you would like Douglas's email address just let me know - i am NPEATY@AOL.COM

Posted by The Archive King at Thursday, September 10, 2009 No comments: 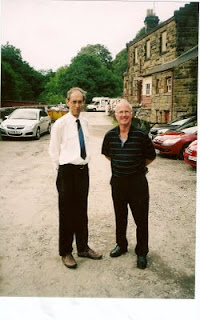 Anthony (Tony) Trent (1956-63) and Martin Jones (1960-68) meet up for the first time in 20 years after a chance encounter in North Yorkshire. The setting is the North Yorkshire Moors Railway at Goathland, reflecting their love of anything that toots and emits steam! Both were in the choir at St Andrew's Coulsdon for many years, a choir enjoyed by a number of other Old Boys over the years.

Posted by The Archive King at Sunday, September 06, 2009 No comments:

a note from Dave Sowden

Nice to see some recent material added to this site. I'm just sorry I missed the reunion in 2007 - I guess not on the right lists.

I was at the school from 1985 - 1988, and I check this site occasionally. I would like to see a bit more material from the last few years of the school so if anyone remembers the year Chris Hipgrave was head boy, do leave a post.

There's also a facebook group dedicated to the two schools - Purley High School for Boys / Girls which gets the odd few posts now and again.

What's really sad is I still have my old Fas et patria tie hanging in the wardrobe! My wife keeps "having a clearout" and I've stopped her chucking it away at least 3 times. In fact what reminded me to check in on this site was that I spotted it in the process of packing last night for an overnight business trip.

You've put together a great site. Do keep it up.

Posted by The Archive King at Thursday, September 03, 2009 No comments: