Happy New Year to all our reader

What finer way to celebrate than seeing Phil Jepson exposing himself to Kevin Copestake after a basketball game in 1976. click to see full sized. 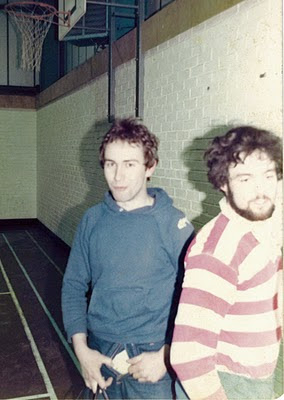 Posted by The Archive King at Thursday, December 31, 2009 No comments:

David Wraight has sent in this team photo. Click to see it full sized 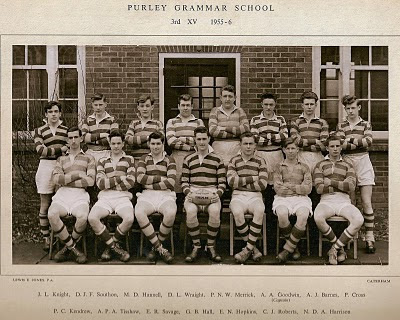 Posted by The Archive King at Tuesday, December 29, 2009 No comments:

Taken around 1988 - probably at the Reunion held that year.

" Having seen Graham's photos of the school in various stages of ruin, let's take a last look at the school as it was in the 1980s, as a slim-line Martin Jones takes us on a tour of buildings that have disappeared, or will soon disappear, as part of the present redevelopment. Feast your eyes one last time on Room 11 and the library, the pavilion, and the boys' toilets with their distinctive odour, and remember the times when the sun shone on reunions, and Capris and Allegros were the height of fashion in the school car park. And, as the school ends its 95th year in existence, let us join with the Revd Holt in singing hymn number 333 from the school hymn book, "Lord, dismiss us with thy blessing" 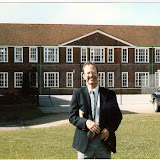 Posted by The Archive King at Thursday, December 17, 2009 No comments:

You can read them all HERE
Posted by The Archive King at Tuesday, December 15, 2009 No comments:

part 2. It was not until I saw the site that I knew that Mr Akers lives in Battle. This is only 9 miles from me !! I have this vision of walking through my Arndale Centre minding my own business and the next minute being lifted by my ear, being told to get my haircut and than having the contents of my supermarket bag emptied on the floor ! As an act of pure cowardice/self preservation I shall refer to Mr Akers as precisely that through my discourse. Cos he will find me, I know he will !

When Tony Blair announced in Parliament that Iraq had weapons of mass destruction, I was neither shocked nor concerned. I knew it wasnt true. The only proper weapon of mass destruction ever was Mr AC Loveland, maths teacher at Purley Grammar in my first year. The stories are legendary. Myth merged with reality. I firmly believe that he propogated the fables and legends, making him the first "spin" merchant and therefore at least 30 years ahead of his time.

A look or glare could reduce me to gibbering rubble and I defy anyone to suggest that they felt anything less than that. Did bats swoop and circle room 25, his base of operations ? Well no..... but if he said they did, you agreed with him wholeheartedly and escaped that corridor as fast as poss. Being only 12, I fused all the stories together. thus this was the man who won the Battle of Britain, escaped from a prisoner of war camp in order to attend a family christening and then tunnelled into a Japanese prisoner of war camp to build the Burmah railroad which had fallen behind schedule... stopping off en route to decimate Dresden.

Of course in reality there was a germ of truth in that he had indeed been a POW in World War Two. Had this not been the case I have an idea the war would have lasted until 1942 tops and that the world map would look totally different today. Certainly California would probably be the only US state not under British rule.

Was I the only person who could tune in to radio 1 in the language lab ? I suspect not ! But I truly must have been mad because if I got caught it was going to be by none other than Mr Appleton. Of course no electronic equipment of such a nature could have been entrusted to 12-14 year old boys. From a central console, raised about 3 feet up, a teacher could both see all 32 booths and, in East German stasi like fashion,  listen in to check adherence to the french tape running without you knowing. Many a boy was caught napping, singing, talking complete gibberish in this way. I was busy writing down the top 20 singles being broadcast by the beeb, keeping a carefully tabulated note of the uppers, downers and new entries. I must have been mentally infirm but the pull of pop/rock music was just so strong. It still is !!

Mr Appletons classroom french lessons were totally surreal, the first 20 - 25 minutes being taken up with us repeating after him between 20 and 30 french "sounds", which were akin to somebody being put through a mangle. The trick, quickly learnt by all was to be just a little "off" with some of the sounds in order that repetition thereof led to the sounds constituting the entire lesson ! A big heads up to Mr Appleton though with one story as follows.....

Alan Frei was in my french class circa 1974/75. Alan's parents were French but despite this Mr Appleton used to throw wobblies at his pronounciation. These wobblies were more pronounced when Alan tried to defend himself against accusations of "bone idleness". The day after a parents evening that year, we sat down in room 10 prepared for another 40 minutes of outrageous mangled persons sounds. In comes Mr Appleton, sits down.....
He then proceeds to apologise unreservedly to Alan, in front of the whole class, for the manner of treatment he had received from him in previous lessons. It transpires that Alan's parents had originated from a region of France (yep, have no idea which one !) where the dialect differed from the rest of the country. Technically, Alan was fine with his french from this perspective. The French taught in school apparently was that of the area around Paris. Many teachers will apologise..... few will say they are wrong. Mr Appleton did both ! Top man !

I cringe in disbelief now at my naivety as an 11-13 year old. Much of this period was spent staring at walls or blankly at teachers so a window to stare out of was a luxury for me. One day in room 30 ( next to the school hall ), I was doing just this when I thought I saw a new boy. Slight of build but slightly taller than me, my gaze was drawn to this person striding toward the front entrance past the cars. But wait.... weren't those trousers slightly "flared" ( cue suspense music !)..... and the hair was on the collar ( more suspense music - sustained !)..... and the jacket though nice had no school badge ! Oh my god was he for it !! Cane on the first day ! Perhaps a good rugby player despite his slightness, a budding fly half even. Maybe that was his saving grace. I admit I prayed for him as he disappeared from sight through the grime of the window.

Miss Maitland never once played for the first xv ! Neither did she receive the cane ! Instead she remained at the school to the end..... There has to be a medal for her for gallantry in the face of male testosterone.... please someone invent one for her ! For my part I took German because I had a great accent owing to the number of WW2 films I had seen, I already had handy terminology ( "Achtung Spitfire" was one, Gotten Himmel another ) and My grandad was stationed there after the war. He could help with the homework... If I posted it to him he could do the lot ! Eventually my grasp of German accelerated away from me at a geometric rate. Verbs went to ends of sentences and words of 18 letters or more surfaced.  I retreated from German bruised and bloodied. Sorry Miss Maitland ! The comedian Dylan Moran said that the german language was like a typewriter wrapped in tin foil being thrown down a flight of stairs. He got that from me !

Nick,  shall I press on with this or have you already lost the will to live ?