I have no idea what the vehicles in the picture were called as I had left by then, but I do know that the original Chawmumbly was neither of these.  It was the old Bedford bus (vintage about 1948, I think) that I and others travelled to Snowdonia in when I was in the 4th form – Easter 1964 from memory (accompanied my Messrs Herbert and Stachach).  I remember watching as some 5th former whose name I can’t recall painted the name ‘Chawmumbly’ along the side of the bonnet, and wondering what the hell Chawmumbly was, and where he got the paint.  This was the first appearance of the name on any school vehicle, I believe.
I don’t have any pictures of the school bus but found this on a website (Google Bedford Bus 1948) – ours was a similar model, although for some reason I can’t quite get my mind around, it wasn’t quite in this condition.  I’ll bet Bill Patterson and Derek Eneas will remember it as I think they both drove it on various occasions.
Disclaimer:  Just in case people get the wrong idea about me, I am not a bus spotter, nor a train spotter and I don’t possess any kind of anorak!

But I do have a good memory.   Now, what was I going to do next…….
Editor's note - he cannot even remember his name but i recall the author is Alan Girling
Posted by The Archive King at Friday, August 27, 2010 1 comment:

A very rare photo - the school buses. what were they called ?? Chawmumbly and ???

Posted by The Archive King at Thursday, August 19, 2010 No comments:

Readers will be sorry to hear of the death of George "Mac" -- here you can see him back in the school quad and more recently at the Reunion in 2007.  More details when known. 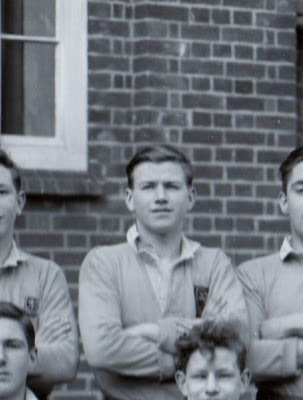 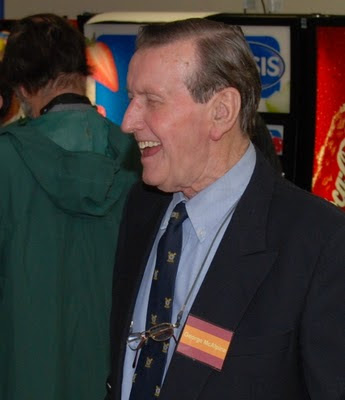 Posted by The Archive King at Saturday, August 14, 2010 No comments:

From Geoff Hayes........
As you know Akers was renowned for his unintentional puns/witticisms.  Here are some DGSisms:
*  "Don't hang around outside the (Purley High School for) Girls' School - you'll only get them into trouble" (1975)
*  After cannabis smoking was discovered on a school Norfolk Broads boating trip, DGS made the offender(s) make a public apology to the school.  DGS finished his rant with "This school's going to pot." (1975)
*  The following year DGS was trying to encourage those who had not been on a Broads trip to consider so doing.  He was describing the holiday on the River Yare.  Some wag (in the 6th form as they were standing well behind me) at the back bellowed, "Not Yare - Yes!" (1976)
* The summer of 1976 was one of the longest and hottest on record.  There had been an incident where a boy had plunged the point of a compass needle into the thigh of another pupil.  The injured party was wafted to hospital in an ambulance.  The next morning, in assembly - and in the insufferable, stifling heat, DGS was describing how the point had penetrated the muscle and tendon etc.  Boys all over the hall began to faint, dropping like flies - there must have been a dozen!  I clearly remember Mr M P Davies carrying out a couple by fireman's chair lift!
* My favourite and abiding memory of DGS was in the Summer of '76 doing 'O' Levels in the Gym.  DGS was pushing a trolley of drinks for examinees around the gym in shorts!  To me this showed the man had a heart - and a sense of humour!
Keep 'em peeled!
Geoff
Posted by The Archive King at Sunday, August 08, 2010 25 comments:

These shots were taken last year by Mathew Clarke - much has changed since. However, you can see that the Tuck Shop has gone. The bottom photo is taken from the bare earth that once was under George Love's Metalwork shop. 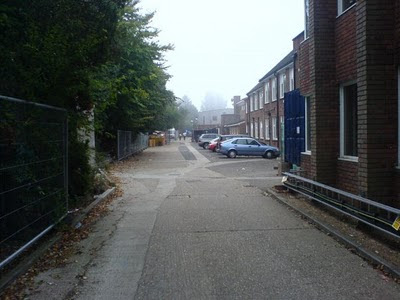 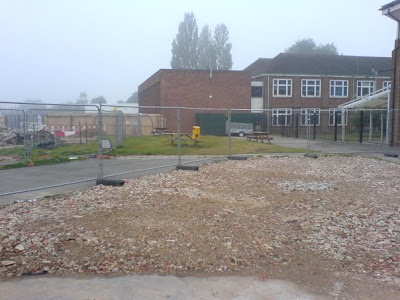 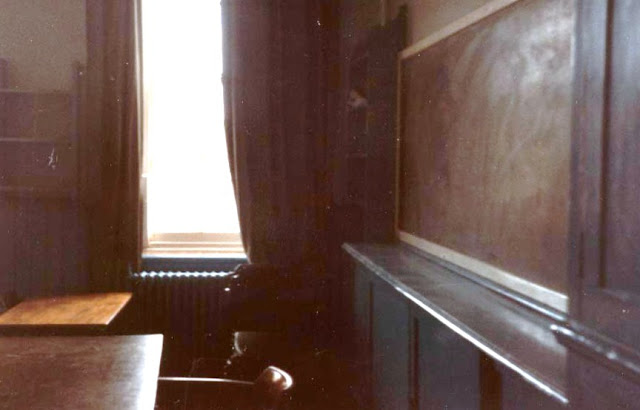 The intense heat of the radiator -- the smell of chalk on the blackboard - the impression of the blackboard duster on the back of a blazer........
Posted by The Archive King at Tuesday, August 03, 2010 No comments: