This was included in the DVD at the Reunion of 2007 - it is a Rugby Match in 1973 taken on cine by Michelle Maitland, the French teacher. The technology of showing videos on here is now much easier so watch out for some more content.
Posted by The Archive King at Friday, November 25, 2011 No comments:

Geography Society
The Bourne's earliest to the Geography Society reference is in 1951-I, but it had clearly already been in existence for some time, with references to earlier visits to Furness Withy Liner at London Docks, where the chief item of interest to the members was the "free tea provided“. That year‘, there was also {=1 field trip to Snowdonia.
The Society's interests were not always geographical in the strict sense - In 1956, a retired missionary gave a talk ‘on apartheid in which he forecast that "within thirty years, the Africans will rise, overthrow and annihilate the Europeans in South Africa. Then in 1957, there was this very bland report: "On March a film was obtained from the Polish authorities on the subject of the German wartime concentration camps. This was shown as being more of a social than purely geographic interest" Juxtaposed with this was a report of a day excursion to Crawley "which stands out as an example of modern town planning." What kind of an example some thought it to be can be seen from the reports of the Citizenship Courses.
By 1959, the Club had returned to purely geographical interests, with a talk on how to travel from Barcelona to Purley for five shillings (25p). The field trip that year returned from Snowdon by the newly opened M1, "a memorable journey For everyone". Support, however, Club seemed to be waning and early in 1962 a winding—up meeting was held which was attended by seventy would—be members, so a good year's activities instead ensued, which included a talk on ‘The Emergent Africa‘. The following year combined the African interest with another talk, ‘Uganda Today and Tomorrow‘, following the declaration of Ugandan independence in Octaber 1962.
In 1965, there was a lecture on what was called the “highly topical subject" of drilling for gas and oil in the North Sea. 1966 saw the first joint activities with the Girls’ School, and since than meetings have followed the familiar pattern of talks, and films. Many of the photographic displays were given by Staff and boys who had been on holiday to places a little further afield and more interesting than Benidorm. Reports often speak of waning interest, but just as each time the Club has been on the point of extinction, an interesting meeting has rescued it. There is no doubt that down the years it has given great enjoyment and considerable knowledge to those who attended its meetings
Posted by The Archive King at Thursday, November 17, 2011 No comments:

Prefab classroom outside the dining hall 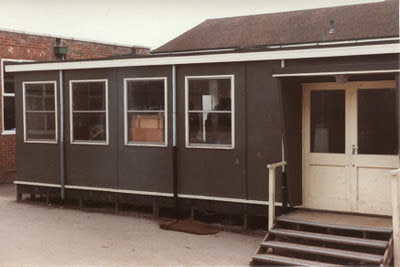 Posted by The Archive King at Sunday, November 06, 2011 No comments: