Thanks to Gerald Tomsett for the link to his photos on FB and Martin Jones for the ones lower down the page. 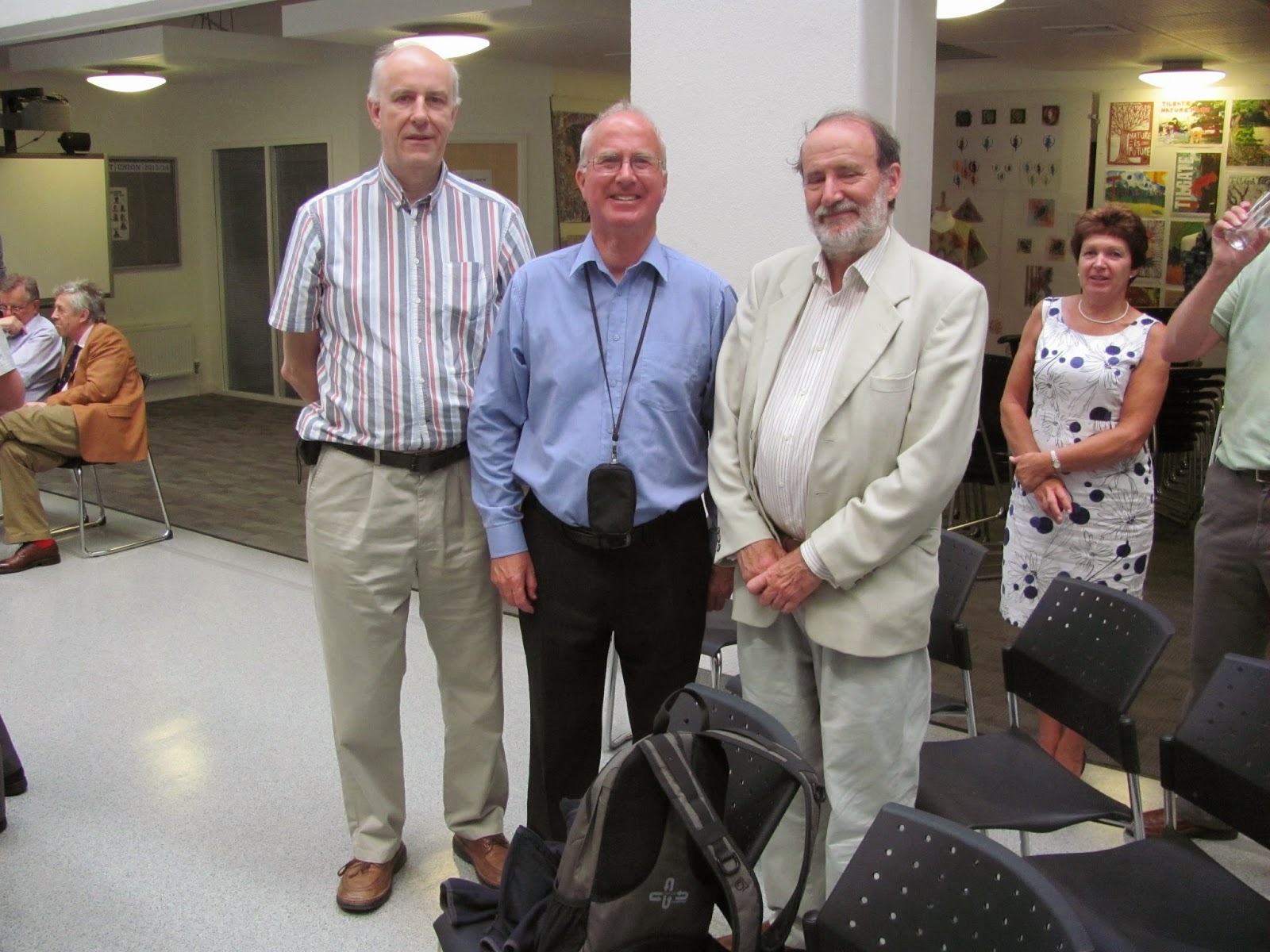 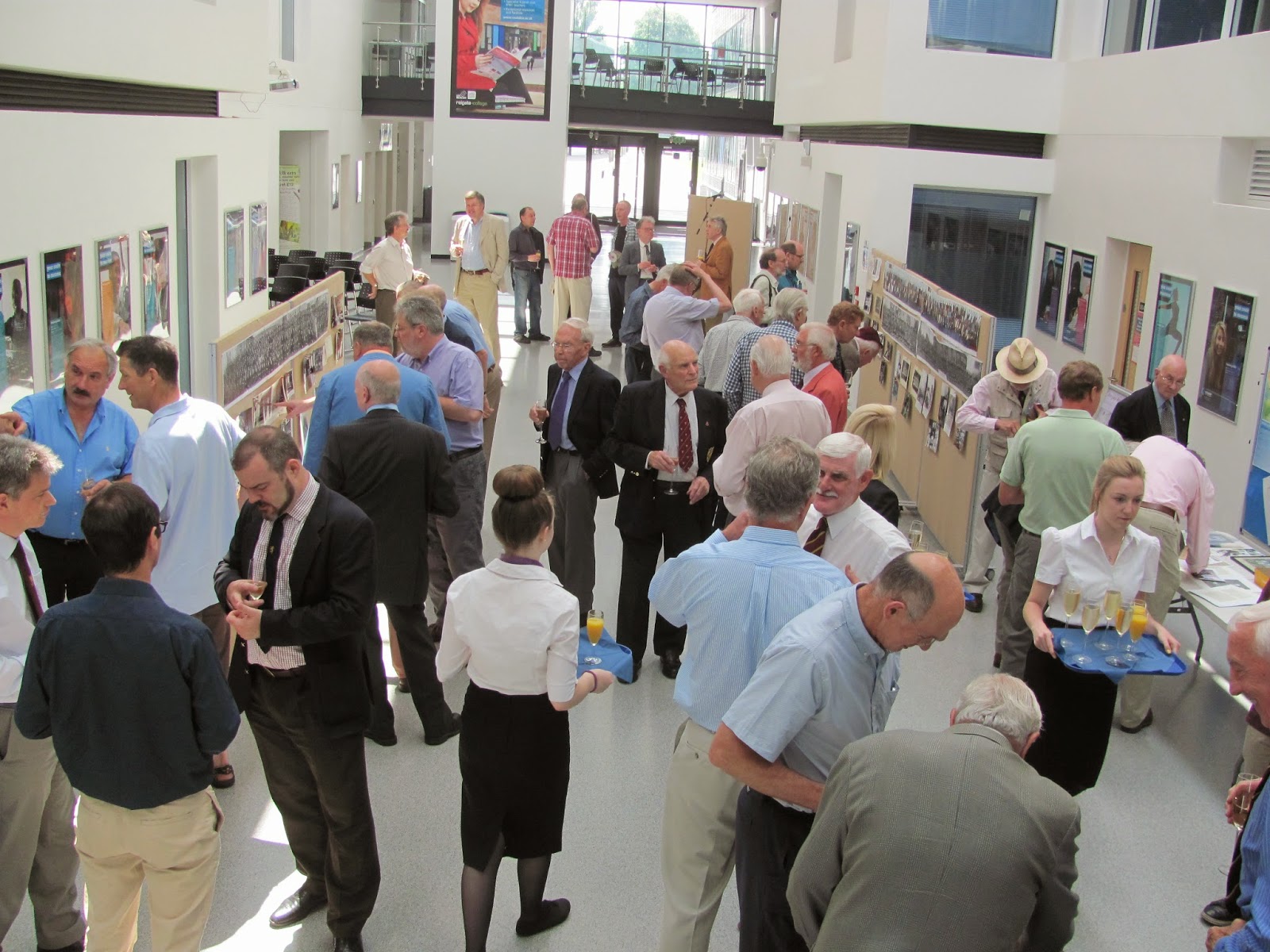 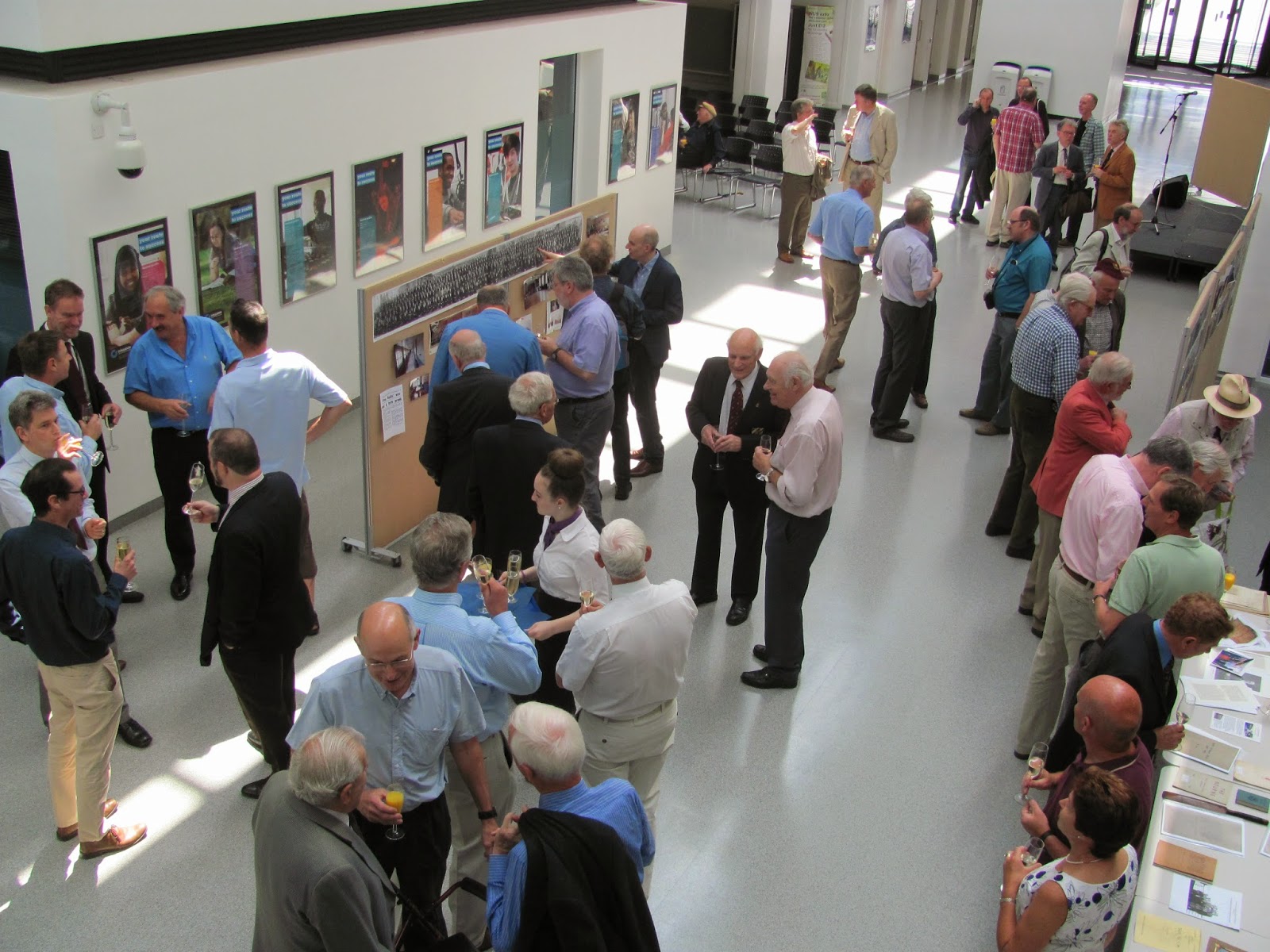 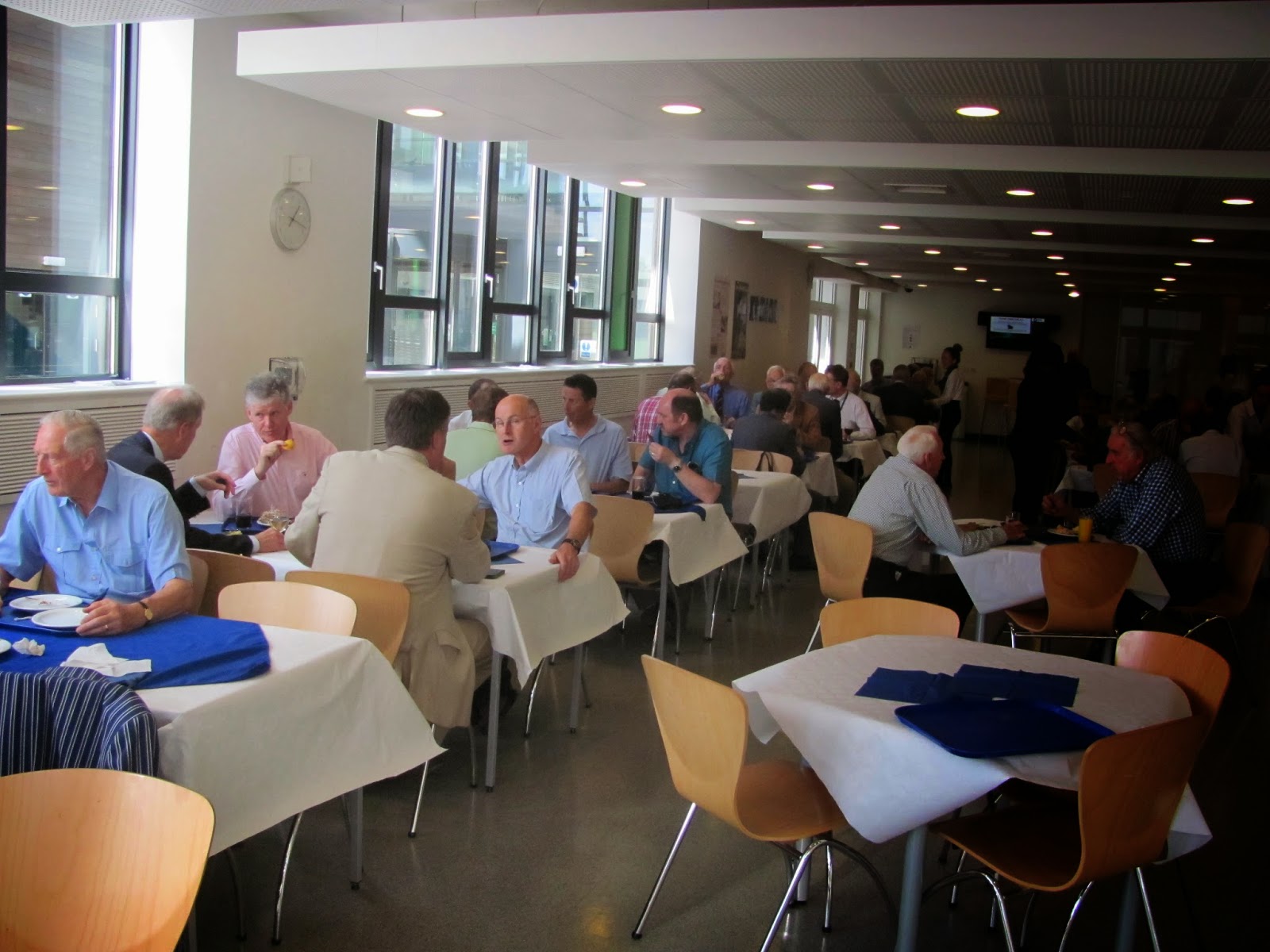 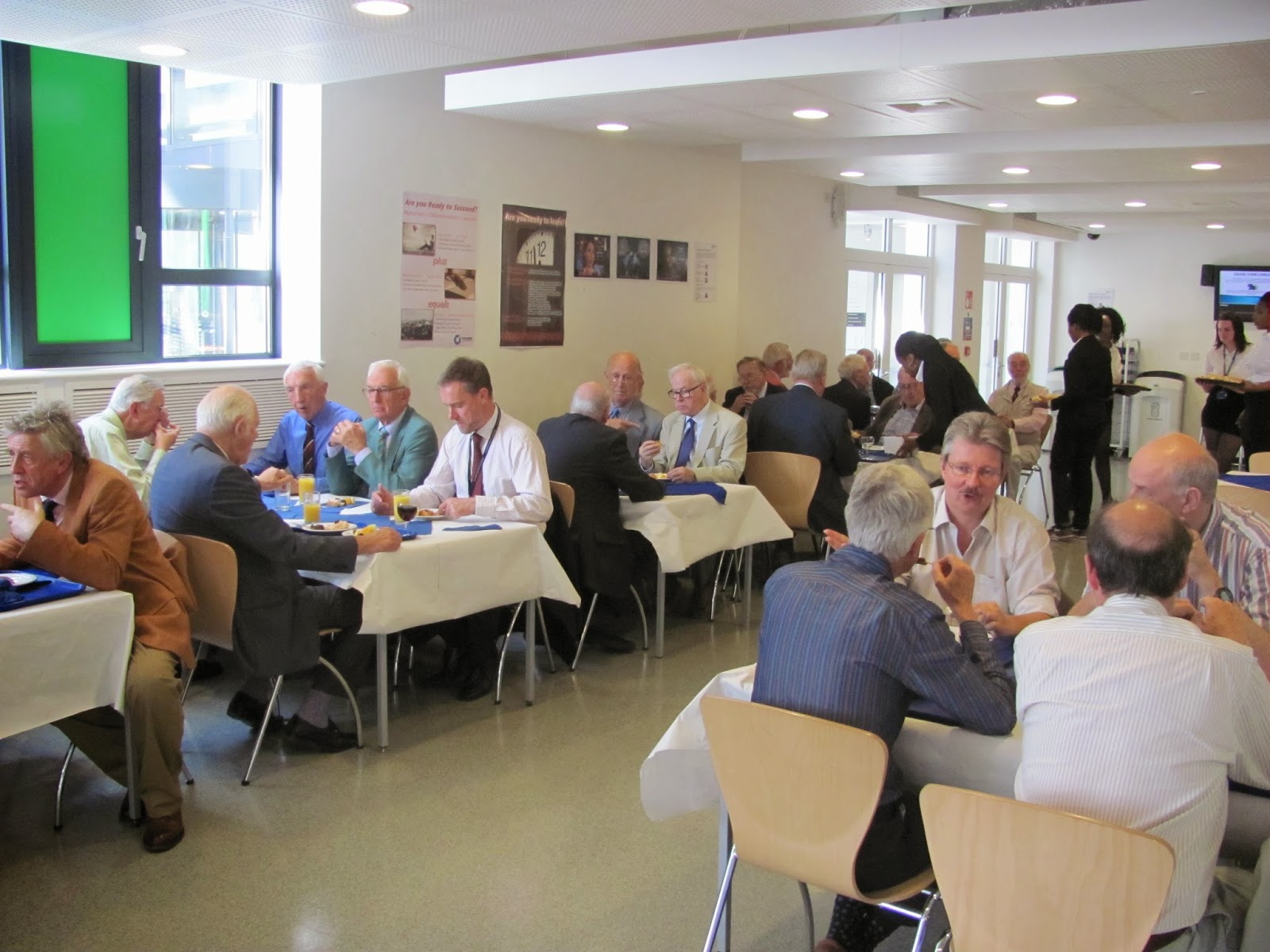 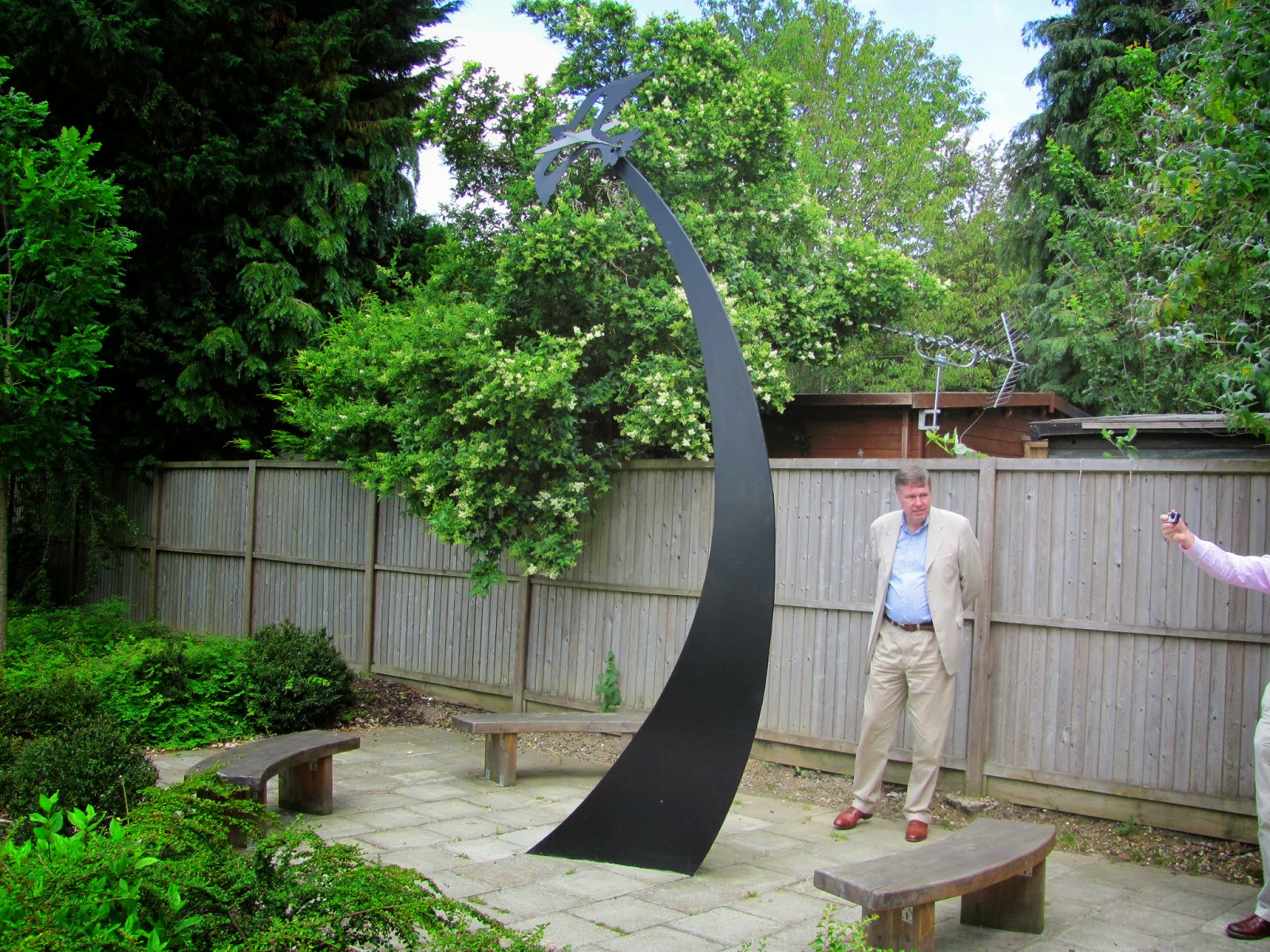 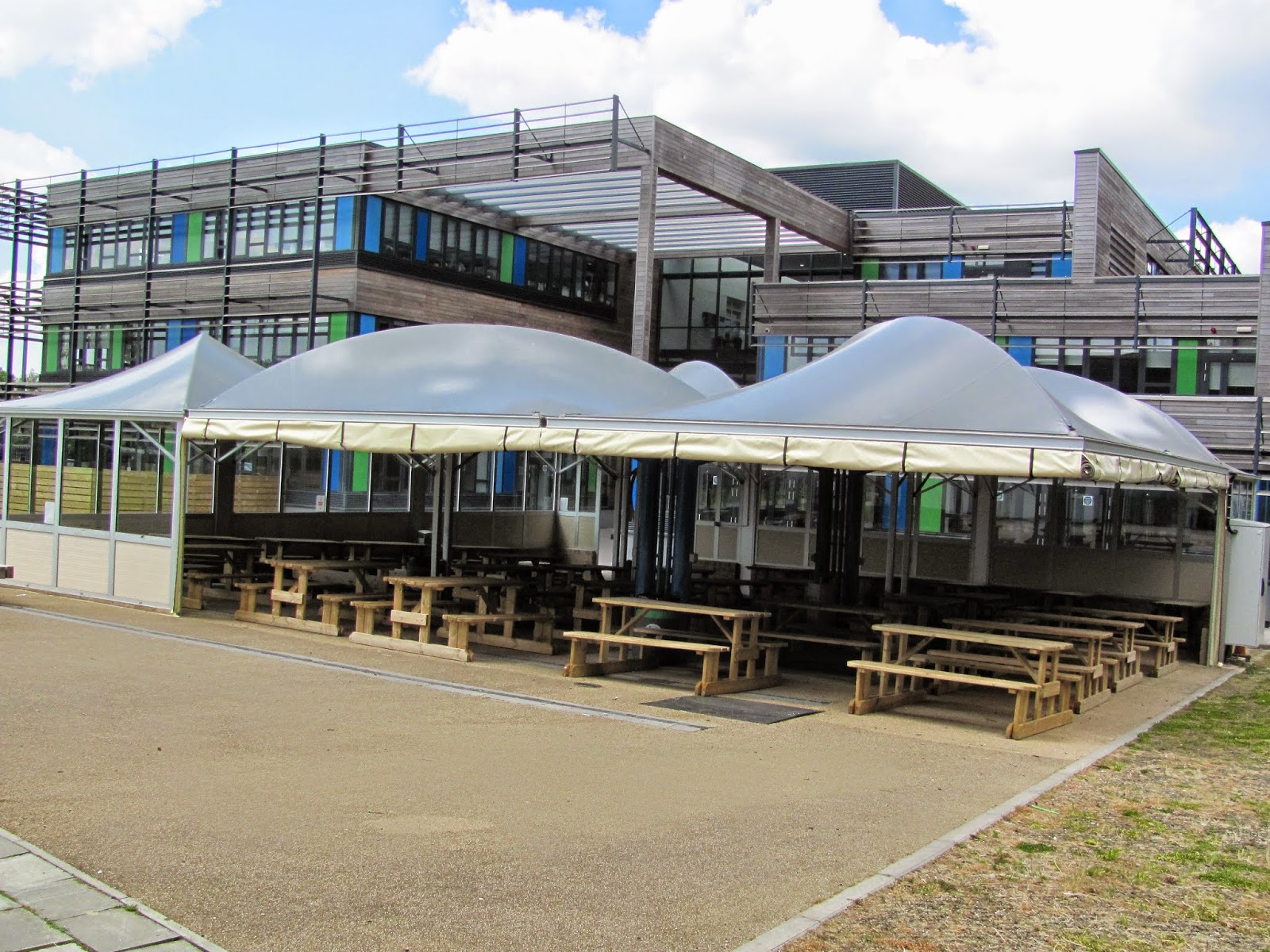 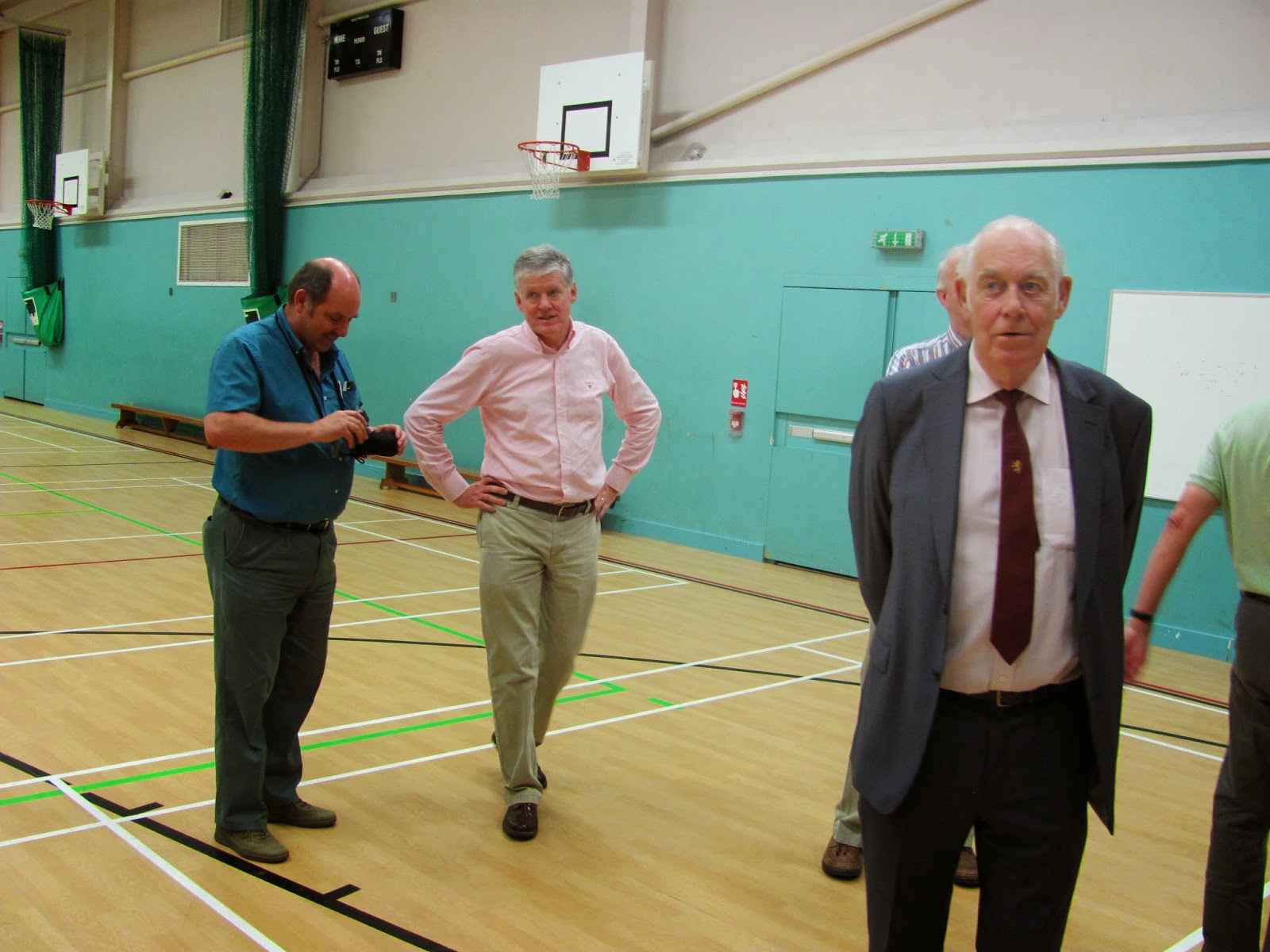 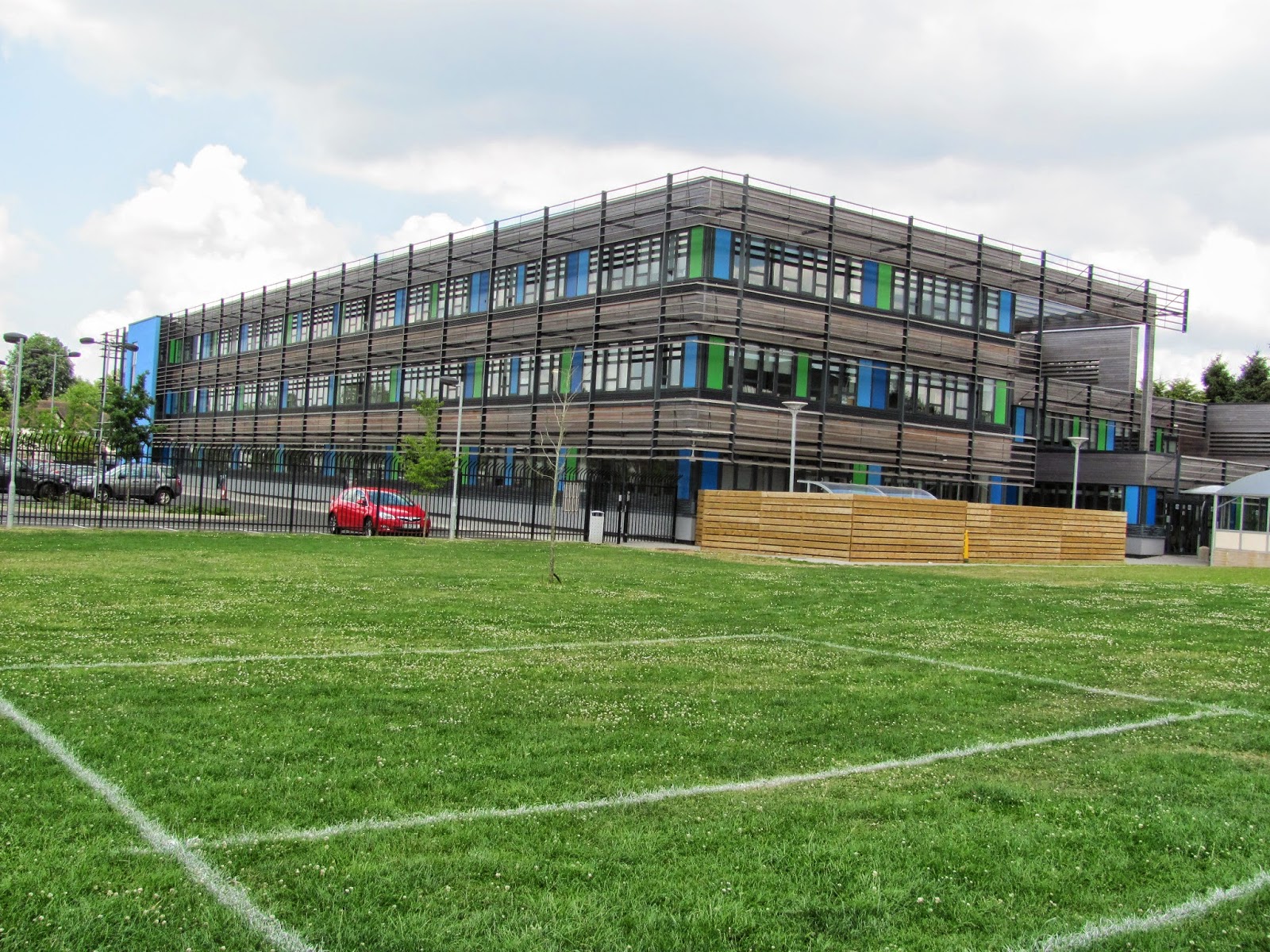 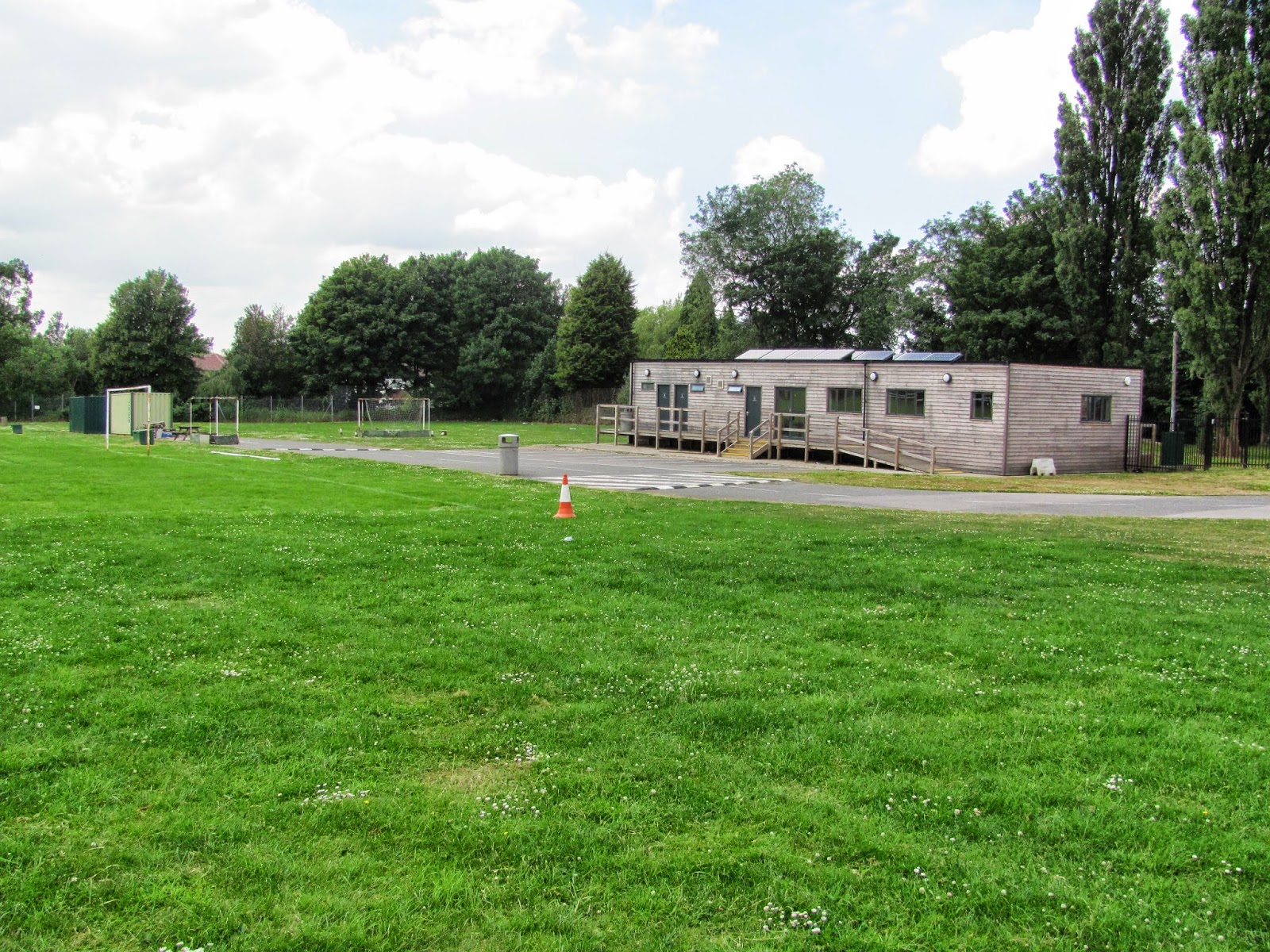 What a good time was had. Over 100 ex Purley Boys joined together for a lunch and a tour of the new Coulsdon College. This has been built on the site of the old School and at £41m it is breathtaking to behold.

We were shown around the College by some of the current students. All of them were a credit to the College.

There will be photos and videos published soon. 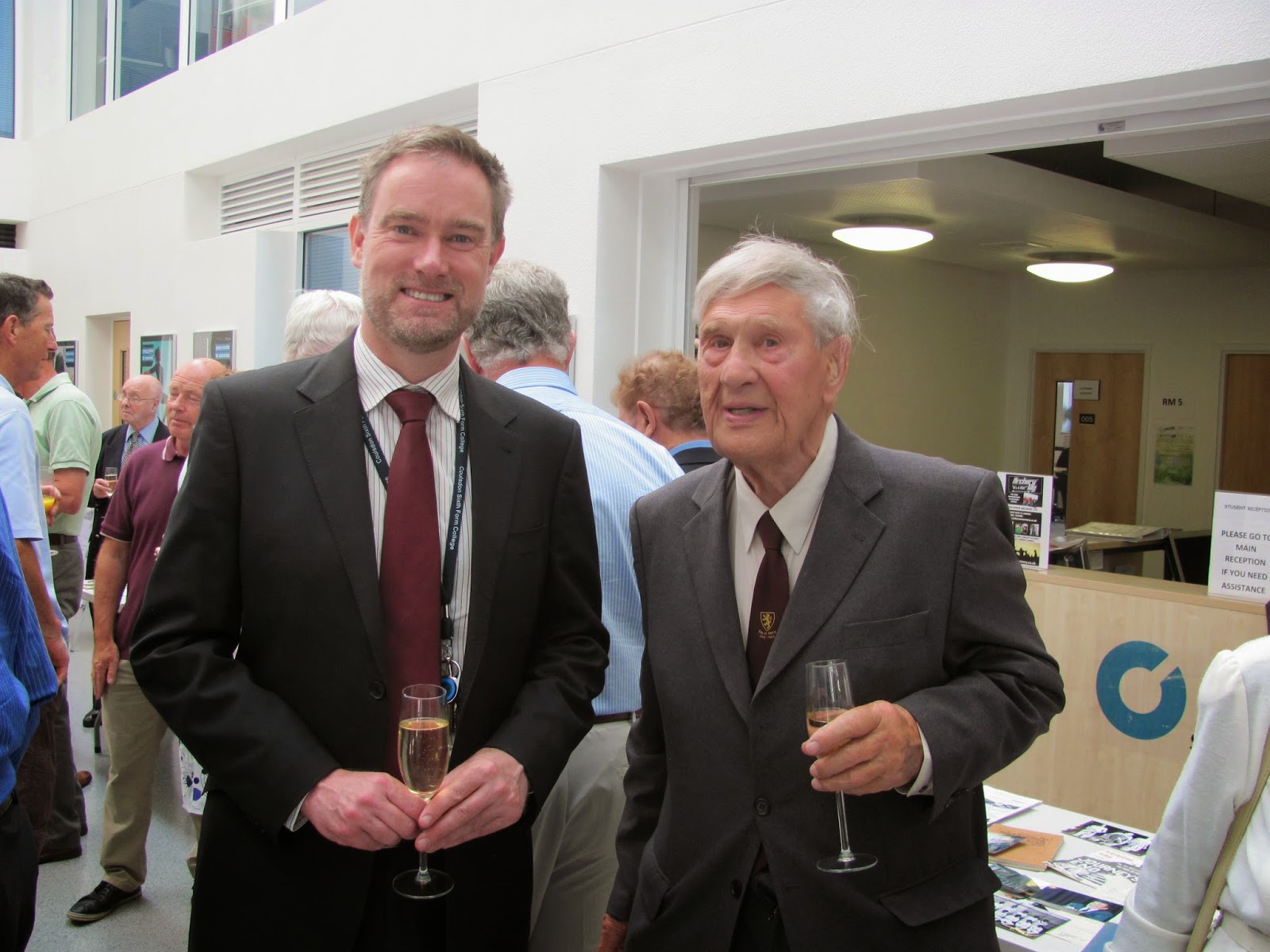 Things you need to know !

There will be nostalgia aplenty, a buffet lunch and this will followed by a tour of the new college.

The Order of Service is :
11.30 The College opens for you.
A glass of something whilst you view the Exhibition / Video / Displays
A few words of welcome from the current Head of the College
1pm Lunch with your year / decade groups
2.15 A few words from Derek Akers, the last Headmaster of Purley Boys School.
Tour of the new College that is built on the site of the old school
3.30 Cup of Tea and a few words from an Old Boy about his memories of the old School.
3.55 Close.
If you have any questions mail us at Purleyboys100@aol.com.
Posted by The Archive King at Thursday, June 19, 2014 2 comments:

Brian Collingridge unfortunately cannot attend the Reunion but sends his regards to all who know him. He has sent in these memories to share.

This was my first teaching post at Purley Boy's.  Teaching Geography to A level, History to O level and PE.  From there I moved to a Quaker Boarding School in N Yorks for 5 Years Then 5 years as  Director of Studies at Chew Valley Comp, South of Bristol.  Then in 1973 I became Somerset's youngest Headteacher at Kingsmead School ,Wiveliscombe on the edge of Exmoor.  A Secondary Modern about to go Comprehensive, where I stayed 23 years, never needing to move for a change, as successive governments always seemed to have fresh initiatives we could not live without!!
I learnt a lot at Purley mainly from the Head of Geography Mike Carey, an incredibly energetic man. Purley was one of the first schools in the area to have its own transport,  initially a Rolls Royce Ambulance subsequently a 30 seater Foden Coach. All you needed to drive either,was a driving licence!! The ambulance was the main transport to Snowdonia where initially the school rented a Barn in the Llanberis Pass.  Then we reconstructed a broken down pair of miners cottages overlooking lake Llyn Peris just below Nant Peris on which I believe the school took a 50 year lease. Driving through London and up the A5 ( eventually the first parts of the M1), after school, on a Friday was one of the joys. Climbing on Saturday with a little more on Sunday, before hurtling home in the afternoon./evening to be fit and ready for Monday. ( How did we do it?) But do it we did, with fresh parties of boys each time. Mike was a great enthusiast for Field trips to make geography real . I took field trips as far as Durham, Wenlock Edge the Weald and my personsal enthusiasm, several caving trips on the Mendips.  On one memorable trip .with Mike we were intending to follow the River Exe from its source on Exmoor to Exmouth but got caught in  flooding at Bampton, where we all, Staff and pupils, spent the night helping locals get their furniture upstairs.
In the summer holidays of my last year I used the Foden coach for a 3 week trip with my wife, 24 boys and 3 other staff, to Jugoslavia via Austria We got as far as Dubrovnik before returning via Venice, Italy. and France. Only one pupil name remains with me. Brookwell, who paid for the Jugoslav trip with his profit from a car he sold one weekend and negotiated incredibly low prices for food for the whole party at every market we came to.  Those were the days.
Mike had set me on a path I never left.  Geography was never just a subject more an enthusiasm you spread.


The staff room was a good place to be. Always supporting although Arthur Jewitt had high standards and soon let you know if you were offending His unique way of addressing staff, Christian names for Oxford & Cambridge graduates, Mr X for other graduates and just surnames for non graduates always amused me.When Dr Birchall retired toTaunton and I met Arthur at his home, as a Headteacher in my own right,. I think he was somewhat disconcerted. .
Posted by The Archive King at Thursday, June 12, 2014 No comments:

We have been able to obtain all the Bourne Magazines from 1914-1955 and these are now being processed so that they can be made available to anyone who has a Kindle for download. A DVD is also available if you want to read them on a computer. Watch out for more details shortly - alternatively contact me at archiveking@gmail.com if you want to go on the waiting list. I am assured that demand will be brisk - book now whilst stocks last. ( Ed's note: - he is bonkers )

Here is an extract:

Lawn Tennis - 1948 Season.
The growing enthusiasm for tennis in the School has
been most pronounced this year, and especially was this
evident in the matches and tournaments. The 1st vi won all
their ordinary School matches, but lost to King's College
School in the Glanvill Cup Competition, after beating Dul-
wich and Archbishop Tenison's. A 2nd vi was formed, and
was successful in three of its four encounters.

The support given to the two School tournaments was
extremely gratifying, the total number of entries for both
being 176. The general standard of play was definitely
higher than in previous years, and many of the matches made
very interesting watching. It would seem that tennis can
contribute a good deal towards the enhancing of the School's
prestige, and it is to be hoped that it will do so in forth-
coming years.

School Tournaments-Singles. Of the eight seeded
players in the Singles, six reached their allotted places in the
quarter-finals, the places the McKenna twins being taken by
Winter and Tisshaw respectively, whilst Taylor g. p.
j.p Asquith were pushed to advantage sets by Hodgson and Mr
Bridge Both semi-finals were somewhat disappointing
Tavlor* last year's winner, made far too many mistake's
against Asquith, who ran out a very easy winner; whilst
Wright though he had his chances in the second set, played
too carelessly at the critical moments to make any headway
against a resolute Heath.

The final was a very different affair, and provided one of the best and closest matchessince the tournament began in 1946. Asquith started well and
led 5_3_0nly to be made to work very hard before eventually
carrying off the set at 9-7. Wisely letting the second set
go, against a now very hard-hitting Heath, at 3-6, he con-
centrated his energies on winning the final set and led 4-0
with some very skilful net-play. Heath, however, is never
so dangerous as when he is several games down; and by
means of some really good passing shots, he levelled the score
at 5 all. Although Asquith once again led at 8-7, he could
not ward off Heath's final attack and the latter ran out a
very worthy winner at 10-8 in the final set.

Asquith and Taylor avenged their Singles'
defeats by carrying off the Doubles with the loss of a total
of only ten games in five rounds. In the semi-finals, the
McKenna twins started off extremely well against them, and
at 4-1 looked like pulling off a surprise victory only to lose
the next eleven games in a row. In the other half of the
draw, Wright and Heath eventually wore down Messrs.
Tisshaw and Bridge, after dividing two very close first sets.
The final was not a great match. Asquith and Taylor com-
bined well, but were given little opposition by Heath and
Wright, who played rather listlessly and made far too many
mistakes to look like getting more than the three games they
eventually won.

Of the other players who showed promise, Helfenstein,
Springfall, Taylor j. m., Henville, Hart, Caffarey, East,
Batchelor, and Turner, all stood out as possible members of
next year s teams, whilst, of the younger players, Clayman
and one of tow others look promising- Good luck to them.
' RESULTS.
Final  Heath beat Asquith, 7-9, 6-3, 10-8,

CHARACTERS OF THE TENNIS VI.
G- P. TAYLOR. An extremely patient and steady player who
relied more on accuracy and placing than on hard hitting.
His unruffled temperament and his courtesy in play were
at all times commendable.
J- P. K. ASQUITH. Compensated for a somewhat innocuous
service by a powerful forehand and devastating work at
the net He brought to tennis the ability and enthusiasm
we have come to expect of him. With Taylor he made
a pair very seldom beaten, even by the most form.dable
opposition. polished player at the School.
D J Heath. Probably the most polished player in the school. When his net work is tightened up he will hit the ball hard. His knowledge of the etiquette of the highest order.
Posted by The Archive King at Monday, June 09, 2014 No comments: