A blast from the past for Colin Wood and Keith G Denyer. Nat League qualifier v Brighton 1977. Great hair, moustaches and short shorts, not to mention a bit less weight than nowadays. This turned up when I was looking for something else. Not sure if I made the foul shot
Posted by The Archive King at Monday, March 30, 2015 No comments: 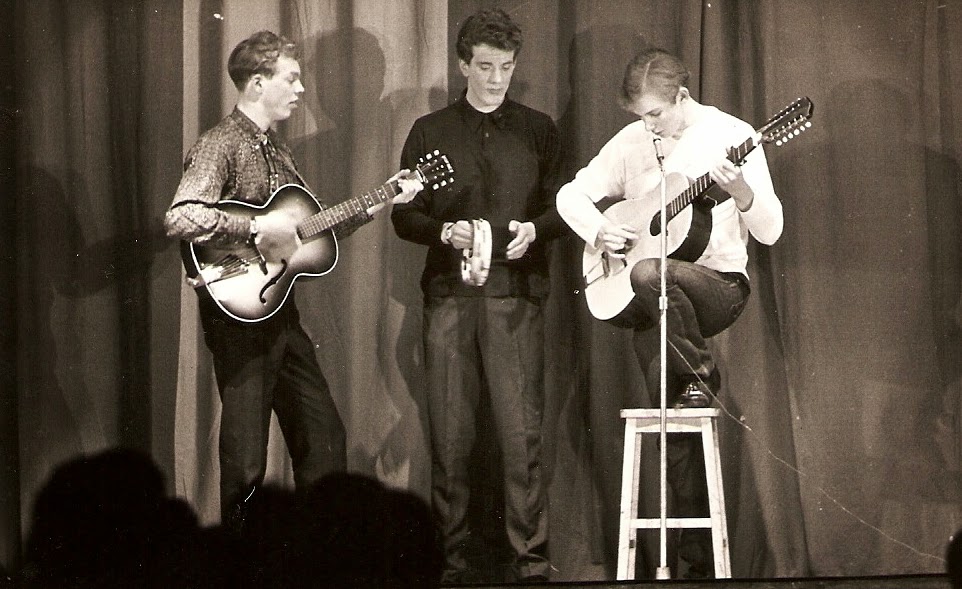 Now we turn to The Serpentine in London and July 1966, the month of England's greatest triumph, and Andrew Webb, Terry Smith and a very youthful looking Adrian Fothergill in the back of the boat, relax during the ultra-demanding post-'O' level citizenship course, beloved of so many boys at Purley at the time! 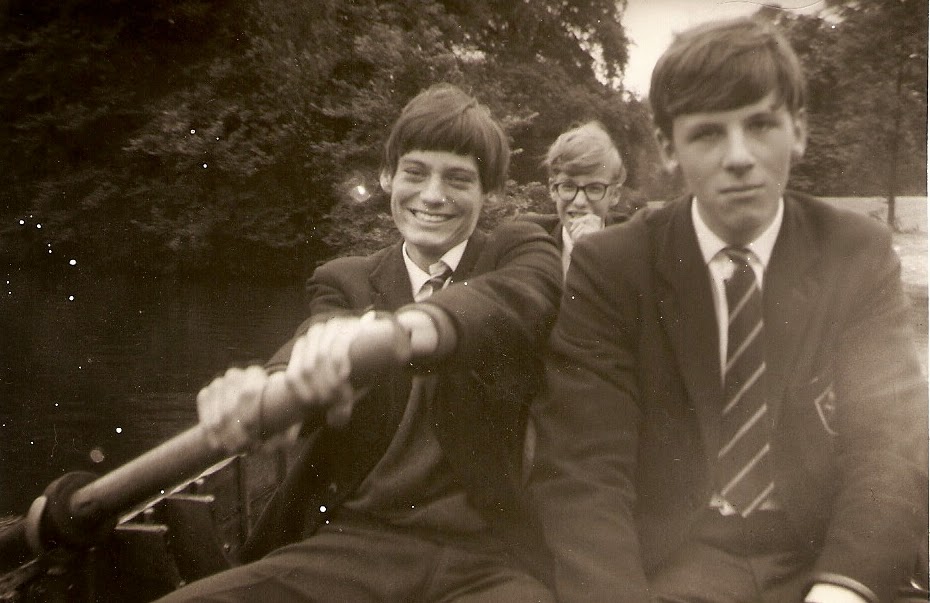 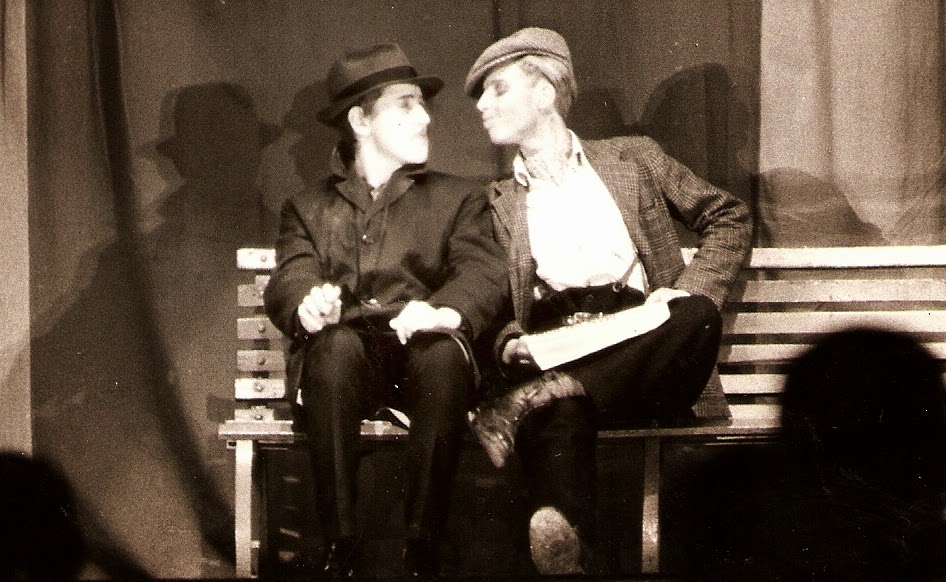 Dave Patterson (right) combines up with (left) Roger Everitt, in the  'read, memorise and destroy' sketch that Martin Everett wrote himself!

and with Mike Finnis 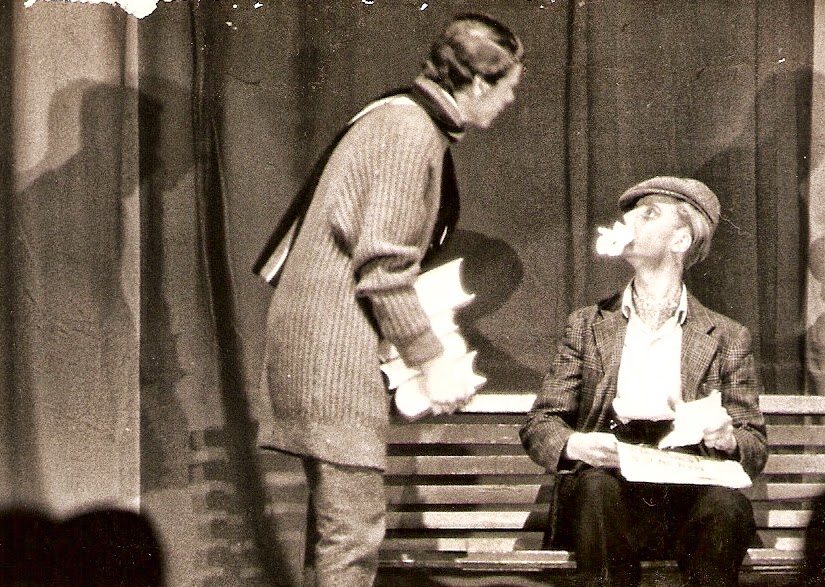 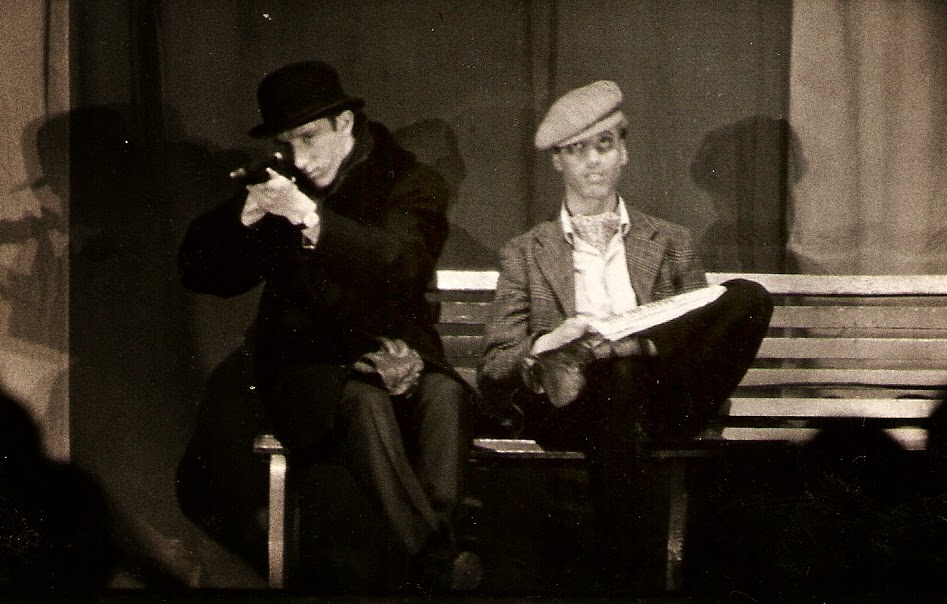 Martin Everett has scanned in some gems part 1

A rare gem indeed as Arthur 'Cringe' Loveland and Vic Gilbert combine to lead the Purley choir at the 1966 Easter Sports Concert.

Left to right - Arthur; an unknown boy who is looking admiringly (or is it terrifed?) in Arthur's direction; Vic; Giles Easterbrook (doyen of many sports concerts and plays); ? Peter Yorke (but if it is, why the school uniform?); Unknown, partly hidden in the background (? Warburton perhaps?); Mr Jeffries (? Peter?); Unknown; F.D (Des) Coulson (Head of English); Roger Massey (Head Boy 1967/8). Other names would be appreciated please. 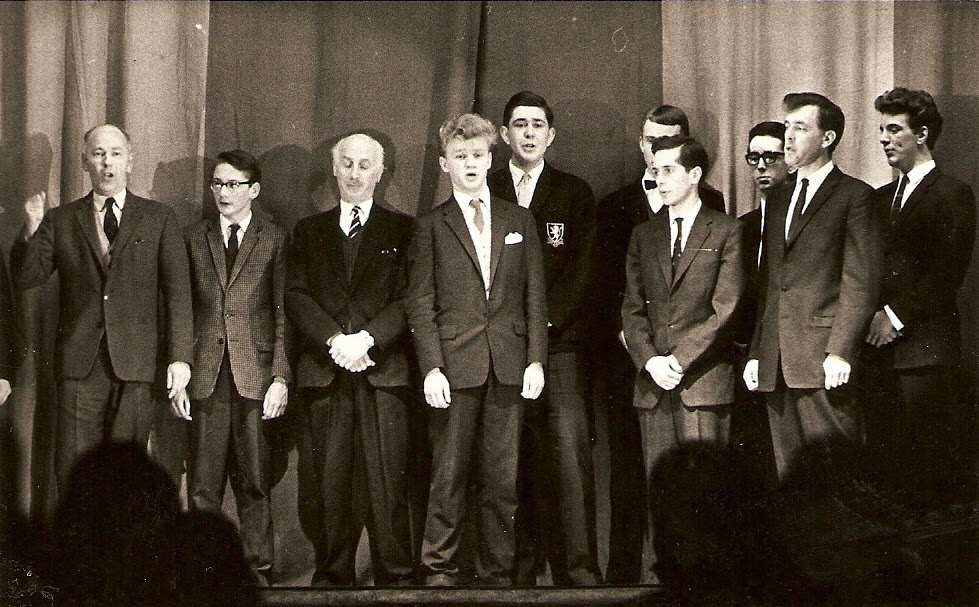 Having met with Graham Brooks, Ralph and Mike Tidy we now have a format for the celebration of Ken’s life at the club on Sunday 22nd March commencing promptly at 1230. We are anticipating a huge turnout since we are assuming that the majority of those attending will be accompanied by their partners .

Contrary to my previous e mail there will be a simple buffet (sandwiches)and Agnes, Ken’s widow, has kindly agreed to underwrite the cost and will be putting a float into the bar.

I should emphasis that this is not a memorial service but a celebration and Agnes has said she would like to make it a “fun” event . There will be a few tributes at the beginning lasting no more than half an hour (important you get there on time) and will be followed by some entertainment  in the form of a Jazz band, an activity enjoyed by Ken. The cost of the band has been generously sponsored.

We will invite those attending to contribute to a collection, the proceeds of which will be sent to the Geneva Hospital Unit which handled Ken’s donation of his organs and one which Agnes wants to support.

If any of the addresses were at Purley Grammar School at the same time as Ken and knew him well I would be pleased to hear from you. I guess he started at Purley in either 1948 or 1949.  Although his rugby career is well known, less is known of his School career.

We look forward to seeing many of you on the 22nd.

Derek
Posted by The Archive King at Sunday, March 08, 2015 No comments:

"I now live in Winchester, but am moving house soon, I'm going part-time from 1 April, but it should be active for 2-3 years yet (if I am).

Greetings to any other old friends you may still be in contact with - or even teachers if any have survived.

I've started browsing the website, but more for later.

Mike"
Posted by The Archive King at Wednesday, March 04, 2015 No comments:

"Mon dieu! Rummaging through his prize possessions, Martin Everett has come across this black and white gem of the 4th year in the gardens of Fontainebleau during the Paris trip of 1965. Mr Pettitt, in his authentic French beret, is nowhere to be seen and must have been inside admiring the artwork, but the expressions on one or two of the faces suggest that they are not too happy spending a sweltering hot Paris afternoon in full school uniform. Back row left to right - Dave Franks, Martin Jones, Miles Chapman, Philip Odell, Mike Finnis, front row - Pete Dewey and Adrian Fothergill. Plans are afoot for a 50th anniversary reunion, and invitations will be issued shortly to any survivors of this and other Paris trips. This will include 3 nights in the same school dormitory as 1965, three wholesome meals a day in the same refectory and an optional night out in Paris (school uniform must be worn) during which a glass of cheap Parisien wine may be consumed by the over-18's." 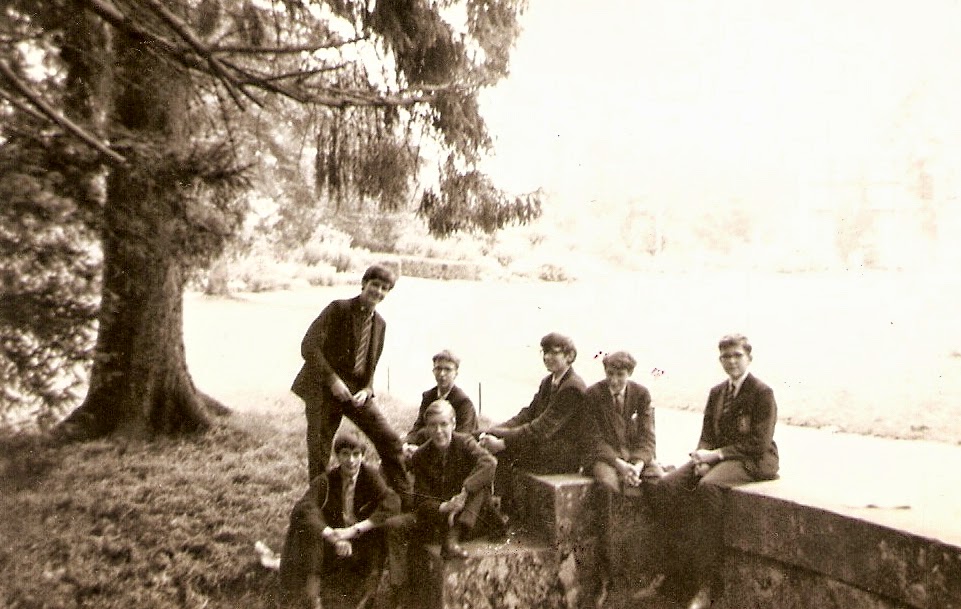