"This 41-sealer motor coach and the minibus were presented to the school by the Parents' Association during last winter. This most generous gift enables us to provide members of school teams (Athletics. Badminton, Basketball, Chess, Cricket, Rugger, Tennis, etc.) with free transport from school to our opponents ground and back; it also makes many educational visits possible e.g. geological field work, theatre visits, swimming several times a week, visits to museums and art galleries and specimen collection for zoologists.At Easter the school Rugger XV used the coach for its tour in South Wales, and two parties each spent a week at the Snowdon hut. Both vehicles were in almost constant use after the summer examinations on the Citizen­ship Course. Other trips in the summer holidays were the three-weeks holiday in Scandinavia which involved some 2,000 miles of travel in the coach at a fraction of the cost we should pay for a hired vehicle. The total mileage covered up to the end of the summer holidays has exceeded 11,000 miles. A team of nine experienced masters drive these vehicles and they have all passed with the greatest credit the test set by the Croydon Authority's Chief Transport Officer. The smooth running of the coaches has been enhanced by the friendly advice and constant practical help freely given by Mr. Keith Jones to who we are all greatly indebted. All these activities, and many others would be far more expensive, it not quite possible, without the generosity of the Parents' Association"

Posted by The Archive King at Wednesday, July 29, 2015 No comments:

1970 3rd FORM PROJECT ...the following is an extract from the 1969 project produced by the Third Form.

VIEW OF THE STAFF ROOM by P. Coe.
The first impression one gets of the staff room is a dark corridor and a number of small, suspicious, sorrowful boys standing outside a navy blue door. The door open, a curtain of blue fumes sweeps out, closely followed by a cascade of ping pong balls. The boys looking more humble than ever, cower under one of the 35 masters milling around the 21ft by 11.6 ft box with one glass side. If one cares to peer through the smog, and endanger your life with the ever flowing stream of ping pong balls, you will see a ring of small armchairs, five or six cupboards and three sleeping masters. If you are ever lucky enough to catch sight of a staff meeting, ( Room 1’s frosted window, when opened a good view of such! ) note first how many masters are listening intently to the Head. When you have got to your third finger you might as well stop as you are unlikely to catch sight of any more. Then count how many masters are telling jokes to each other: this will be in the region of 25. Five masters will be voicing their opinions on 2c, 3b, 3c, and 4c’s behaviour and they generally decide to quit their job. The other five will be nodding their heads gently but steadily at the liars. Then, of course, there is the mid morning break. While a squeaking trolley is being carefully manoeuvred down the flight of steps by the Dining Hall, the Masters are jumping with glee at the thought of a fag and a cuppa. Surprisingly, however, the staff are fairly well organised even though they seem in chaos. No wonder…..they teach US

The Third Form Talent Competition by Paul Bradshaw
After assembly on Weds 9th July , the boys who were not going to the Imperial war museum or the Science museum amassed in Room 19. There they were divided in 4 groups each led by Messrs Holt, Mant, Harker and Mrs Ananin. These groups had from 9.45 until break to improve and practice some sort of entertainment for the other 3 groups.  After the break, the 4 groups crammed into Room 13 . First to perform was Mr Mant’s group. P.G. SMITH  clarinet, Gaffney and Bradshaw ( guitar ), Carr, Musgrove King ad Clarke ( vocals ) sang two well known folk songs "Blowing in the Wind" and Michael, "Row the boat ashore". Second was Mr Holts group   carter, Shelton and Mr. Holt.  The scene was a newspaper editors office, with Shelton as the Editor. Reporters came hurrying in with news that had happened only 15 mins earlier but the Editor wanted HOT news   not STALE news. Finally, a reporter came in and created hot news by murdering the Editor. A very amusing sketch for the time allowed. Group 3 was Munkenbeck ( Guitar ), M Ward and Smythe ( vocals ). They sang Kumbaya. Seale, Mathews and Gibson appeared under the eye of Mr. Holt and presented us with a front Line comedy. Seale was a veteran taking 2 raw recruits to the Front Line. Munkenbeck & Co. then appeared again to sing (?)  "There But For Fortune" He had written the words out on the blackboard in the hope the audience would join in but they didn’t as none of them knew the tune! The best sketch was by Mr. Harker’s group. It was a "take  off " of Morning Assembly. Masters took the part of the Headmaster and numerous other other boys played  Teachers and members of the Choir. The Reading of the story David and Goliath taken from " God is a Real Man. After Assembly Jepson came and read out the Detention list and Sports Notices in the manner that Dawe is accustomed to do. Mrs Ananin's Group was the last to appear and in the opinion of most of the people there was not as good as it could have been (no reflection on Mrs. Ananin). The sketch was the subject of newly weds.

7th July - a trip to the Regents Park Zoo
A party of some 30 Purleians arrive Regents Park Zoo and harassed  various Geese and Cranes as we arrived at the turnstiles. The first group of animals we came across was a group of mangy, moulting Bactrian Camels, and then the famous inamourous Panda Bear chi chi. Then we went into the cat house where we saw lion's, leopards, lynx's and jaguars. In the elephant house we were met by an obnoxious effluvia emanating from the elephants whose bath time it was. We continued our tour into the Australian house with its emus, wombat, and one cassowary. Then on to see the famous Black's swans. After the lunch interval, during which one member of the party tried persistently to get himself lost, we arrived at the aquarium , where we saw such gems as a Cornish sucker, manta rays, moray eels and one fish which has a striking resemblance to one member of staff and shall be known as such until the end of Term. We came  back out through the Snowdon aviary, a fine piece of engineering and then through the Giraffe house and passed some sparsely populated Owl cages. We arrived back at school at 4.20pm, still intact and express their thanks to Mr. Harker and Mrs. Ananin for accepting responsibility for the party.

THE EDITOR: PAUL MASTERS WRITES...Contrary to the thoughts of a few nonconformist, Purley is, I think, getting better. In preparing for the onslaught of comprehensive education, Purley will undergo certain facial and academic changes. We must be prepared for a general modernisation, which is already been shown by the language laboratory and the rumour of a second Gymnasium by the tennis courts; academically we face a probable lowering of standards and an earlier introduction of part specialisation, experimented with next year's Forth form.  The recent failures of the school's alleged two main sports is on the decline, and a tightening up all round has been experienced during the past few terms. Many people enjoy the facilities of the Snowdon March and tuck shop and there is an underlying theme of enjoyment and satisfaction, despite any temporary modern avowed thoughts on the matter of uniform, rules, assembly and games.
Posted by The Archive King at Friday, July 24, 2015 1 comment:

Mathew Clark has uploaded a great video of his on to the internet over at the Purley School for Boys group on Facebook.


"I filmed this footage for a friend of mine in 1991 who had moved away and wanted to show him the building works at the former Purley Boys School. At the same time, I filmed other parts of Old Coulsdon and inside St John's Church. The notable thing here is that you can see and hear the old church organ"

click the link below these 2 photos to watch it: 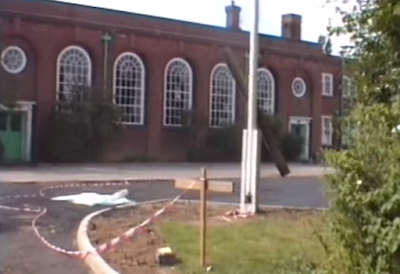 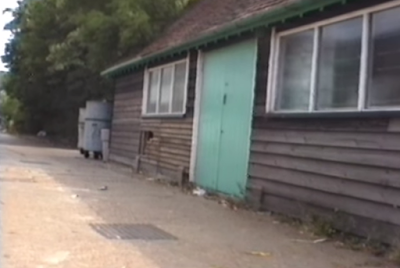 Any one recognise the gent in the red cap from his days at Purley ? Martin Hooper methinks..... 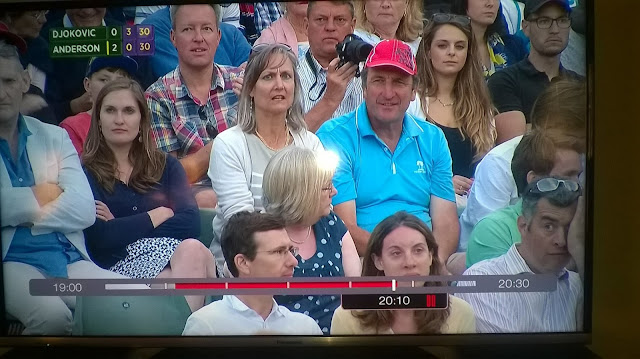 A large posse of Old Purleians met at the Leatherhead Crematorium to celebrate the wonderful life of Abbo / Joe / Martin Abbott who recently died.
Amongst the many mourners were John Hanson ( 1948 Cricket XI vintage ) and Colin Benson ( 1955 ) and your author ( 1973 ). 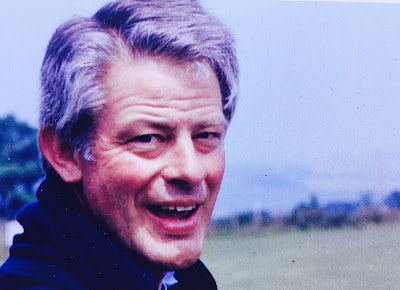 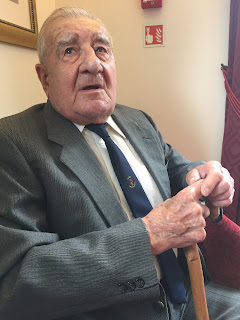 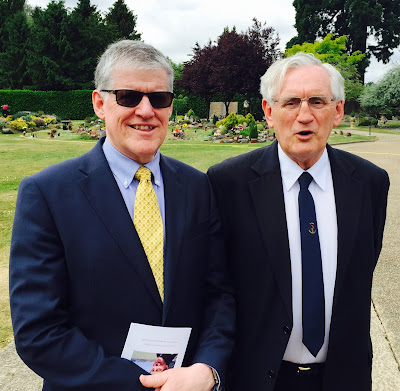 Read at the service was a poem ( see below ) that it is believed that he had written about his beloved Worcester Cricket Tour. Details of this event - that still is in running - are recorded in a booklet that he wrote to celebrate the Tour.
You can read details here -
http://peaty.net/opcc/optimists.htm