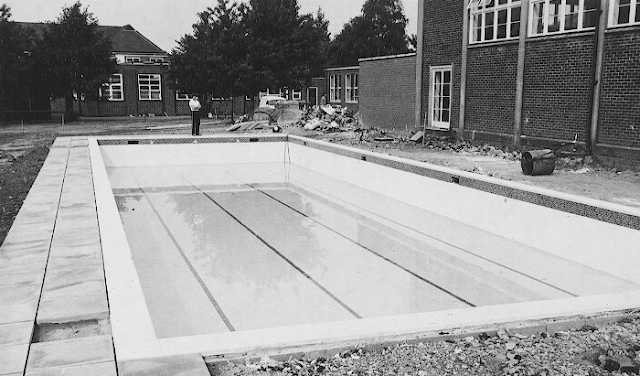 The old Gym, the Woodwork shop and the Kitchens can also be seen.
Posted by The Archive King at Thursday, August 27, 2015 2 comments: 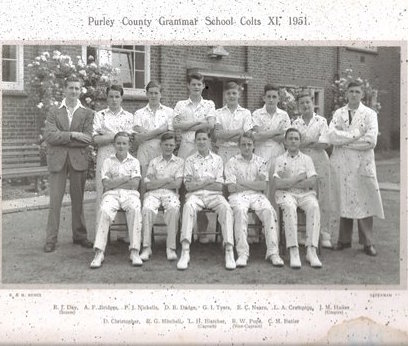 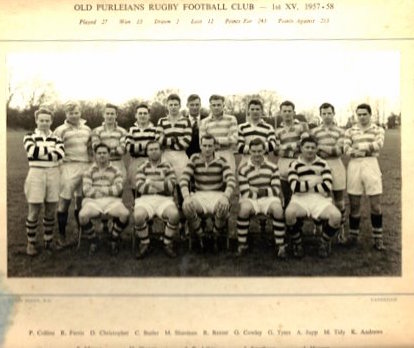 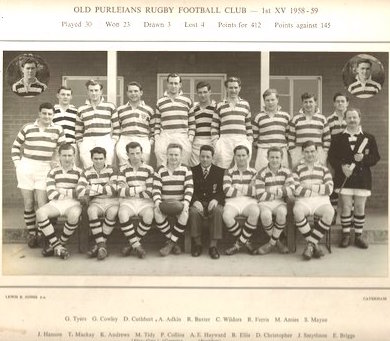 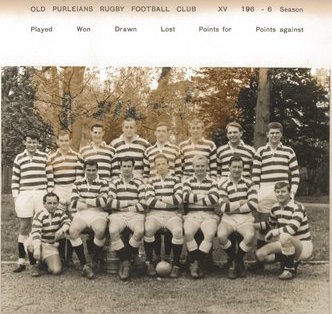 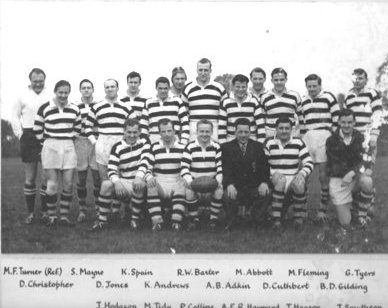 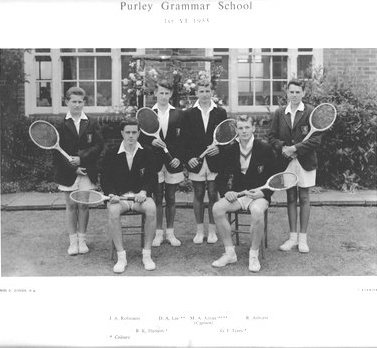 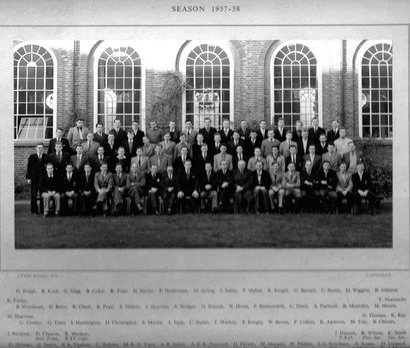 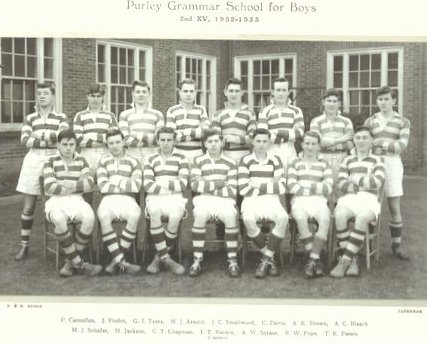 The view from the Staffroom 1971

1971 saw a change of status for the school, from Grammar to Comprehensive. However, thanks to a remarkably smooth transition, it seems that Purley High, as it is now called, will not suffer a radical change of character, despite the fears voiced by some, provided the present level of co-operation between Staff, Prefects and the Senior School is maintained, there need be little concern for the future. To turn to more pleasant subjects, there was a large amount of pupil participation in the Sixth Form Walk, "Much Ado About Nothing" (in conjunction with the Girls' School) and the indefatigable Sports Concert, the record success of the Fete, and the many musical concerts. The latter were almost entirely due to the ambition and expertise of Mr. Bell. He attempted several modern works, and though he was only a temporary addition to the staff, he certainly made his mark. Mr. Pettitt and Mr. Payne also made their presence felt, though in an obviously more permanent way. We wish them both a long and happy retirement.

The school will also lose the services of Mrs. Eneas, Mr. Yorke and Mr. Bowen, to whom we give our thanks and best wishes. Finally, we would also like to thank the members of staff (especially Mr. Shirley) and the other contributors to the magazine, without whose assistance we would have been lost. 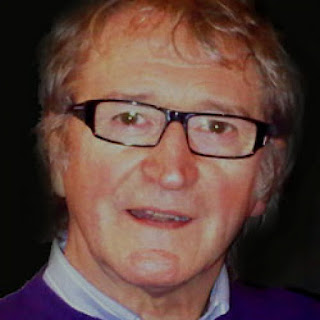 Ed's note: Here is a recent photo of John Shirley. Very much active in the world of theatre.

Arthur Lawrence Payne was educated at Bath Grammar School and the Bath School of Art. His studies then continued at the Royal College of Art, at the conclusion of which he was awarded A.R.C.A. in 1934. Before coming to Purley he taught at Wirral Grammar School and at the Bath School of Art. He was appointed initially to Purley in 1938 "to teach for two days each week". This commitment was however increased to "five days per week" in 1939. Thus, for over thirty years, thousands of boys at Purley benefitted from the help, advice and teaching of this most gentle of men. Lawrence rarely complained, even though at times he was called upon to teach large groups in very cramped premises. He regularly taught groups of thirty sixth formers, some of whom were following Advanced Level courses, others Ordinary Level courses, and the rest studying art merely as a relaxation from their academic work. He always came out of these schizophrenic situations smiling and cheerful and despite the fact that the art classes were usually filled to capacity, he would never turn away extra pupils "so long as they were really interested and would benefit from inclusion in the group". For many years Mr. Payne graced the hall with his art and pottery displays and with the most realistic scenery he painted for many school plays, operas and Sports Concerts. On several occasions as the curtains have opened at a school production audiences have applauded at the appearance of the set. He has now retired from teaching to sketch and paint in the peacefulness of the countryside and his own home. We sincerely hope that both he and Mrs. Payne will enjoy a long, happy and healthy retirement.   C. C. PETTITT A.L.P. This summer saw the departure of Mr. Pettitt who had taught at the school since 1962. He taught both French and Russian and did so with thoroughness and patience, but he will be best remembered for the annual trip to Paris made at the close of each summer term. Without his leadership no Paris visits would have taken place. He conceived the project in the first place, and planned all the details so thoroughly that little change was necessary in subsequent years. His first consideration was for the welfare of the party, for which he took full responsibility and endless trouble, and the way he handled the French authorities in order to obtain the best conditions was always a source of admiration to us. His knowledge and love of Paris and of the French language was immense, and he was constantly concerned with awakening in us an understanding and appreciation of French history and culture. These four short days were of great significance to us, staff and boys, as a rich and lively experience and those of us who helped and accompanied him know how these nine annual visits were always happy and successful. We extend to him and his wife our best wishes for a long and happy retirement.

The Dave Shepherd led expedition to Snowdon in 1970

Nigel Milchem sends a Christmas cracker of memories " I have dug out my old photos of the 1970 Snowdon trip that Dave Shepherd single-handedly (and foolishly) took a dozen of us on.  Some of the reprobates that went are in the pictures but there are a couple of shots of DS very clearly burning the bacon. Looking at the state of the kitchen and cooker it's a wonder that anyone survived.
There are a few snaps either of the hut or taken from the hut including a rather poor quality one of a sunset over Dolbadarn castle (you can just about make out the main road). "

Thanks to Nigel Milchem for these.

"I recall Ian (Barrel) Jennings and Nic Ananin being on this particular trip but I can't remember who the other 3 were. I'd be interested to know if anyone else can.

Photo in dining room with piece of bacon rind on plate below: Tim (Bert) Weedon, Chris Brain, Chris Young (who as a consequence of a midnight police raid on the hut was caned by Dogs for blocking the Llanberris Pass with rocks), Bob (Chuff) Belither, Geoff Stayton and the late Dave Austin. 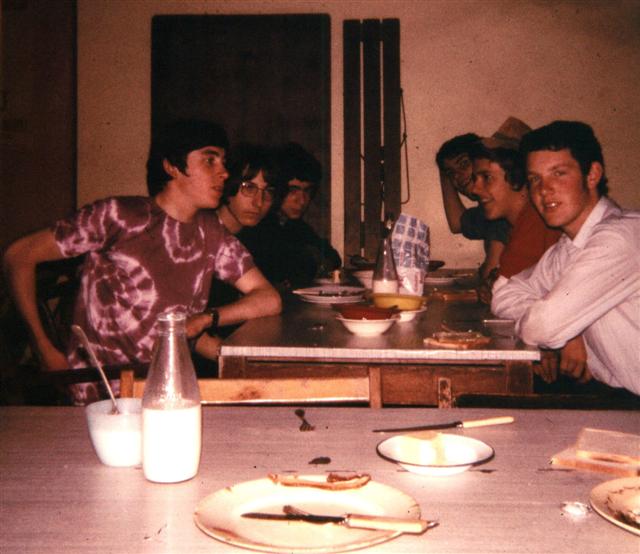 The hut had large wooden shutters in those days and there was a spare one which we lit a fire on and floated out onto Llyn Peris. It drifted right out into the middle and we abandoned it. An hour or so later, DS was standing by the front wall outside the hut and spotted it smoking away on the lake. He was aghast and stormed, "Who the blithering hell did that?" Quick as a flash, Dave Austin replied, "Free Welsh Army, sir." 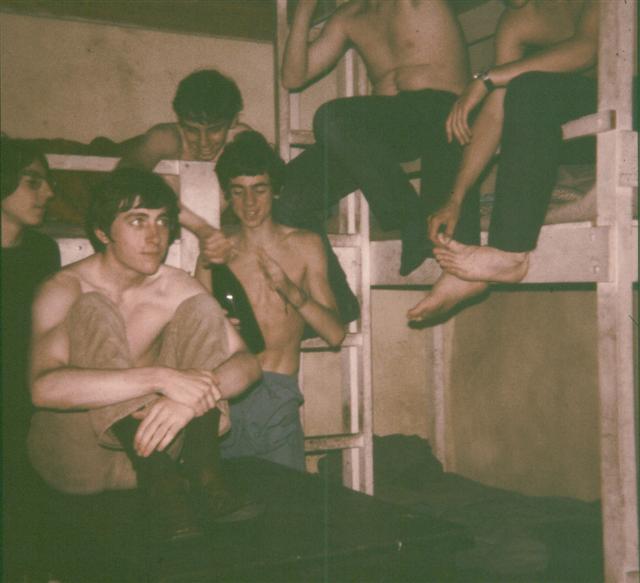 Photo in dorm above: Chris Brain, Tim Weedon, Bob Belither, Chris Young, and headless Dave Austin and Geoff Stayton (picking his feet).  click on the pictures to see them in more detail. 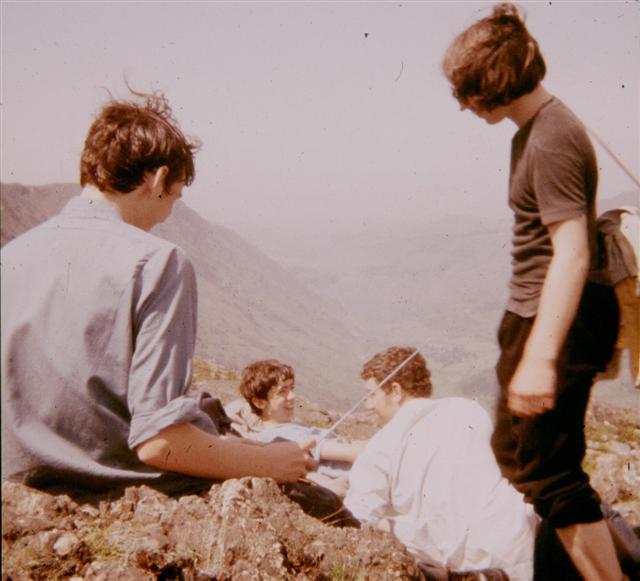 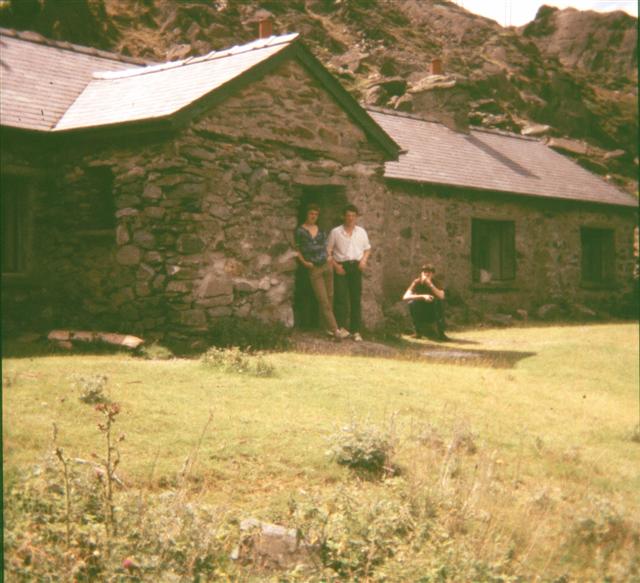 Posted by The Archive King at Tuesday, August 04, 2015 No comments: