Living in Hartley Down, Purley during WW2 - Tony Neale's memories.

Martin Jones has sent this in. It is an extract from the Bourne Society's Local History Records (May 2016) about Tony Neale's time at Purley GS during World War 2. This is set out below and is reproduced with Tony's permission.
"On moving to Hartley Down, Purley, my mother swiftly enrolled me (in 1940) at Purley County Grammar School for Boys. I remember being in awe of the fine building and the masters in their gowns. But it was the recently-completed school air-raid shelters which were also to make a lasting impression. They had been built on the edge of the playing field at the rear of the school and were similar. although smaller, to those on Kenley Airfield, half below and half above ground.

Each shelter held a form of boys seated on duckboards down the sides of the shelter - we all got ridged bottoms! In the early days lighting was provided by a few hurricane lamps, to be replaced by electric light bulbs. Our masters did their best to teach but, with neither blackboards nor desks on which to read and write, and poor lighting, it proved an almost impossible task. I am afraid we often resorted to playing simple card games.

The nearest air-raid siren was situated on the far side of Coulsdon Road next to the junction with Canon's Hill. Its wails could be heard for miles around. With the Germans launching both day and night raids it was not unknown to leave home for school before the All Clear had been sounded from the previous night's raid, and to spend virtually the whole day in the shelter before going home. Our only break from the tedium was being allowed to go into the hall for school dinner. With hindsight, during the early years of the war, I believe we spent as much time in the shelters as we spent in the classrooms.

There were of course no school trips to exhibitions, places of interest or tours overseas. Younger masters would fail to appear (having been 'called up') to be replaced by new but older ones having been brought in to fill the gaps. The Headmaster, Mr B E Mitchell, must have had a torrid time both running the school and having to teach chemistry.

However there was a chink of hope. News percolated through the school that the best shelter to be in was that supervised by Mr Duffield, the Latin master. It was not that we were avid to be taught Latin but rather that it had become known that Mr Duffield took a keen interest in Egyptology. Hence, seated at the entrance to his shelter where there was some daylight, he would read to us 'gripping yarns' of the lives of the Pharaohs, the Pyramids, Valley of the Kings etc. But what appealed most to those of us with ghoulish imaginations, were the accounts of embalming. Those pupils not privileged to be in Mr Duffield's shelter avidly gleaned details from those who were. We soon learned how the bodies of the deceased were preserved by bandaging, while the organs were removed and the component parts carefully separated before being preserved for the 'Afterlife' in sealed ampullae. One of the more intricate parts of the process, particularly intriguing to us, concerned preservation of the brain which - so far as I can recall - required special measures.

In the event, it was a pity the CSE exam did not include Egyptology. I'm sure we would have all scored highly; even if not so good on the traditional more important subjects."

Martin Jones comments - an interesting article from Tony Neale. I remember the entrances to the air-raid shelters were still in place when I arrived at Purley in 1960, but needless to say, we were never allowed to venture in, and they were swept away a couple of years later when the Science blocks were built and metal bike sheds were put on the site of the shelters. I also remember the siren on the corner of Canon's Hill which (along with the siren next to the Red Lion in Coulsdon) were tested from time to time until well into the 1960's. And what a dreadful wail they emitted. One afternoon in October 1962, we were allowed to go on the field to watch a rugby match and half expected to hear the siren wailing for real. However sense prevailed and the Cuban Missile crisis was thankfully averted.
Posted by The Archive King at Thursday, June 30, 2016 1 comment: 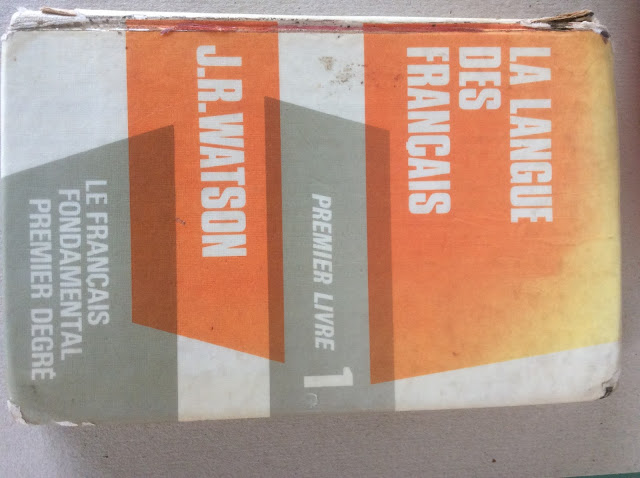 The Opening of the Hall in 1932 - I don't think any witnesses are still with us. 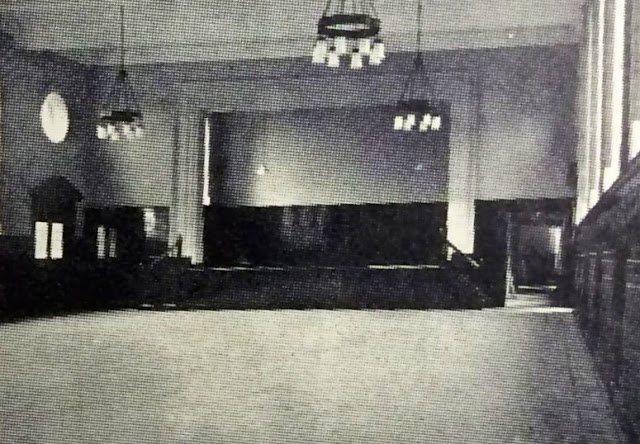 Alan Girling has done some research: 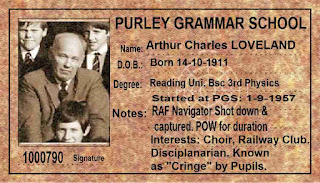 Many of us from Purley Grammar School will remember Arthur Loveland - nickname 'Cringe' based on what we all did when, many years in advance of Alex Ferguson, we were subjected to his version of the 'hair-dryer' treatment if we wandered even marginally off-subject or even looked like we might talk in class.  The subject was Maths, of which he was an excellent teacher, although his reputation as a strict disciplinarian often overshadowed this fact.  We even thought the 'C' initial meant his middle name was in fact 'Cringe'.  Actually, it was Charles.

However, having seen the brief note about him on the Purley High School group pages on Facebook, my interest was piqued about his wartime experience in the RAF, having done quite a bit of research about my father's RAF history and others with whom he served.  So, for those who may be interested, I have dug out the following from free public websites (so no privacy issues) which offers a description of his last flight leading up to his capture.

Born on 14 October 1911, he was 28 when war broke out.  I guess he must have volunteered for service fairly soon after that as he trained as a navigator in the RAF Volunteer Reserve. Training of navigators took many months.  By early 1943 he found himself in 78 Squadron, Bomber Command, based at Linton-on-Ouse, North Yorkshire.  (Unlike most WWII Bomber bases, this is still operational today).  The squadron was equipped with Handley-Page Halifax bombers, which along with the more famous Avro Lancasters formed the mainstay of the RAF's bombing offensive.  Arthur Loveland was unusual in the sense that he was 31 at the time - the average age of aircrew in Bomber Command was more like 22 throughout the war.

I haven't discovered how many operations he flew in total, but on 5th March 1943, at 18:38, he took off on what was to be his last operation.  Flying in a Halifax serial number HR687, squadron code EY-G. he headed off for a raid on the industrial town of Essen.  He was one of a crew of 8 - the Halifax normally had a crew of 7 but on this occasion there was a co-pilot on board.  Taking a route over the Netherlands to approach the target from the north and hopefully avoiding the worst flak, EY-G never made it to Essen.  It was attacked by a Luftwaffe night fighter somewhere over the Ijsselmeer and the Halifax went down.  The pilot, Flying Officer John Thompson, rear gunner Sgt. Edward Williams, and wireless operator Sgt Arthur Blackwell were killed, the latter having baled out but his parachute failed to open.  Sgt Arthur Loveland, co-pilot Sgt Kenneth Mercer, Flight Engineer Sgt Otto Proctor, bomb aimer Sgt Alfred Leyshon and mid-upper gunner Warrant Officer Raymond Chiswell, were all captured and made prisoners of war, Ken Mercer after being on the run for a few days.  I can only assume that Arthur Loveland parachuted to safety - staying in the aircraft and expecting to survive a crash landing with 13,000 lbs of bombs on board strikes me as a most unlikely and certainly unwise course of action.  The Halifax hit the ground at 21:35 near Rouveen, Netherlands, and Arthur Loveland's three crew mates who did not survive are buried alongside each other in the cemetery there.
It seems that Arthur was originally imprisoned in Stalag VIII B in Lansdorf, then he was subsequently promoted, whilst in captivity, to Flying Officer in September 1943.  This seems an odd move and I'm not sure how common this was, but he was then moved to Stalag Luft III, a prison camp for RAF officers, which was made famous (or infamous) as the scene of the Great Escape (and the Wooden Horse escape, I believe).  Obviously he was not one of the 76 escapees otherwise he probably wouldn't have survived.  He was further promoted to Flight Lieutenant in 1945, shortly before his repatriation.

OK, just a small part of his history, but quite a story about some bloke we just thought was a strict but very good Maths teacher.

Ps - What's clear is that he had a lucky escape.  There was a little more room in a Halifax than in a Lancaster, but not a lot.  I've ridden in a Lancaster (on the ground) and it was quite difficult to manoeuvre inside the aircraft just dressed in normal clothes.  As our pilot pointed out, with a full flying suit on, in pitch blackness, with the aircraft on fire and probably out of control and the floor awash with hydraulic fluid, finding your way to the escape hatch was no easy task.  Your best hope was that the pilot could retain some sort of control just long enough for any uninjured crew to get out, but as soon as he let go of the controls to try to get out the aircraft would go into an uncontrolled spin trapping the pilot in by centrifugal force, which is why so few pilots escaped, and this is quite possibly what happened to Arthur's pilot.  Just conjecture of course, but he did well to get out in time.  It's also possible that the poor guy whose parachute failed to open actually had to jump without one, as there wasn't room in the rear turret to stow a parachute, so he would have had come back out through the door of the turret, get his parachute, clip it on, get back into the turret, turn it through 90 degrees and exit through the same door into the night sky.  All fine and dandy if the turret still works..... many did not once the electrics and hydraulics had been damaged, so the tail-end charlie was left with the choice of certain death in the crash or taking your chance and jumping into the unknown with out a parachute and almost certain death.  Again, there's no evidence that this happened in Arthur's plane, but it's not entirely impossible.

Oops, here I go again.  But we often lose sight of what these young guys went through

Sources for this include: 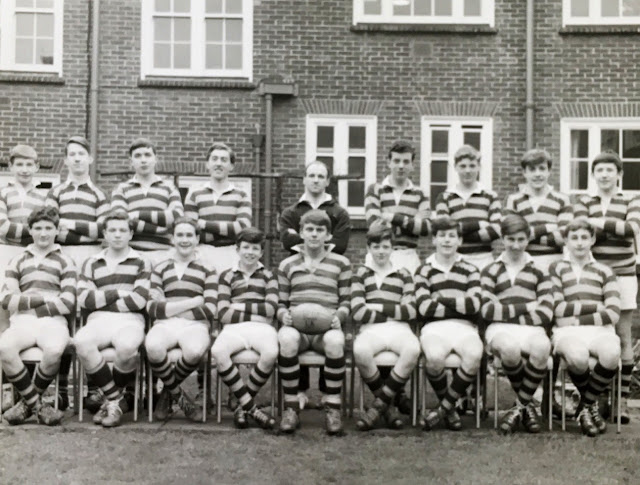 Martin Jones has spotted the balding master as "Mr D Jones, part time PE/Games, Latin, English and History teacher, clearly a man of many talents although I never had him whilst I was at Purley. Back row - possibly Frampton (3rd from left) and definitely Massey (next to Mr Jones)"

Can anyone date the building of this monstrosity ?

Athletics team under the watchful eye of George Nicholson - circa 1964 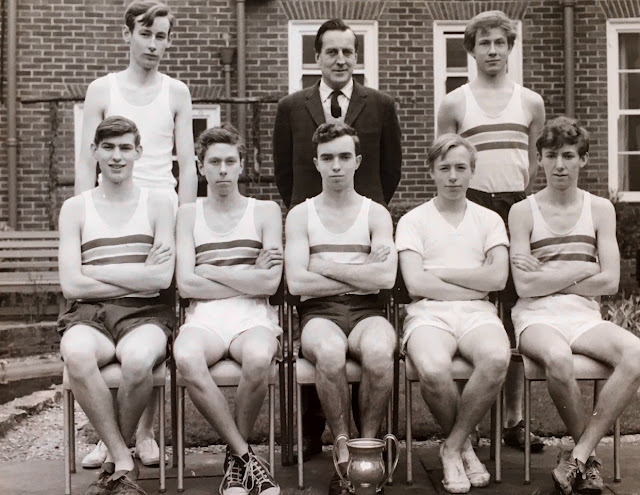 Posted by The Archive King at Wednesday, June 01, 2016 No comments: