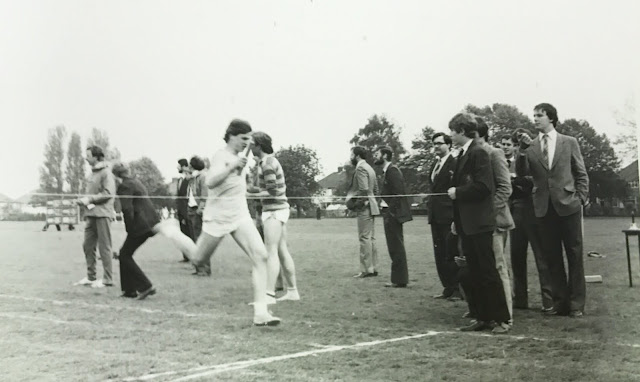 Nicholas Derwas Holloway Possibly Mr Osbourne, (GLO): beard, glasses, and hands in pockets, near the tape. So definitely post 1973, when he started at the school.

Neil Baker No thats a Dr Venter. This has to be from 1978 onwards. Thats also Mr Moorhouse behind the winners right shoulder.

Paul Grove Bob Taylor sixth from the right. From what I can see Geoff Osbourne is actually third from the left with Mr. Stanton with hand in pocket to his right.

Neil Baker No thats Moorhouse next to GLO I believe

Julien Sarju no, check the flares

Neil H Burchell John Sutherland is in the centre with hands in pockets.. 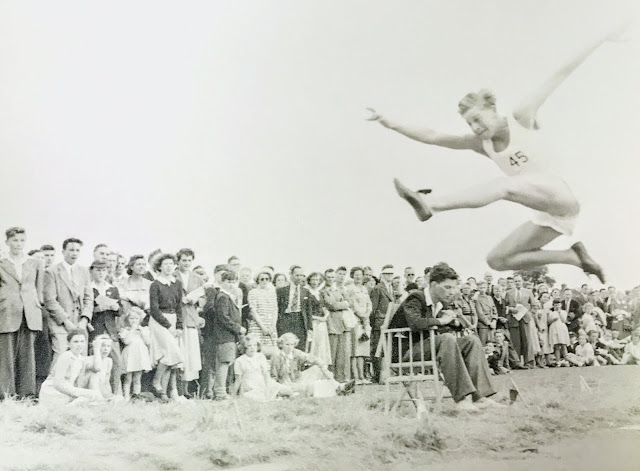 John Hanson comments: "Brian Gilding played rugby, for the OB's and cricket and athletics at school.  He died of cancer age 32!"
Posted by The Archive King at Saturday, May 27, 2017 1 comment: 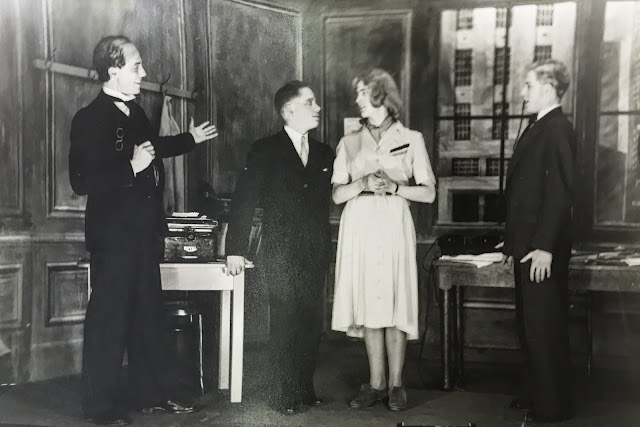 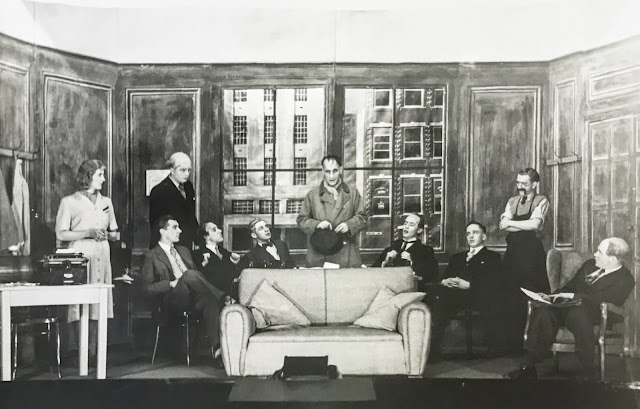 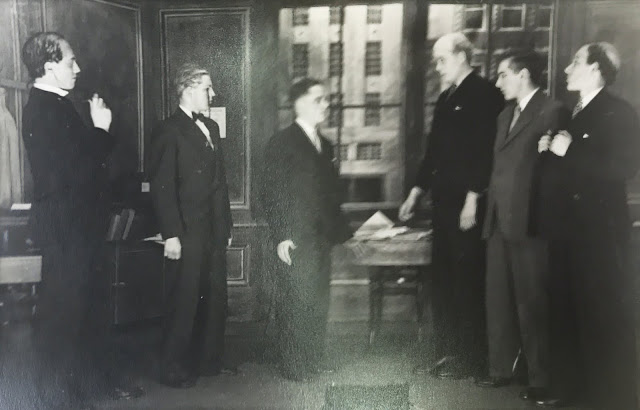 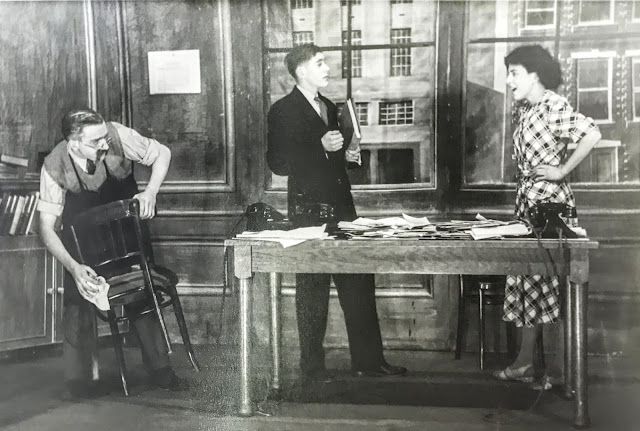 Nigel Goadfrey writes and would be very pleased to hear from old mates from his days at Purley. Let me know if you want his email address via the comments box below.

Great to find your web site!

When doing a search for Purley high school I notice that results are Heaviside slanted towards the corporal punishment record!

I just attended the 4th year 76-77 and then went to a nautical school on Anglesey for the 5thyear, and then joined the Royal Navy at age 16.

I remember putting down DOGS as a reference without asking him! I had written him a letter during my year away so he did write a reference - he did his National Service in the navy.

I am disappointed to have missed the reunion in 2007.

Martin Collins, Roland Jones, Simon Plummer and Austin Slattery were my mates from Woodcote and then at Purley.

I now live in South Wales, so may visit Ben's Cottage on the weekend of the 8th June when I attend a reunion of my nautical school." 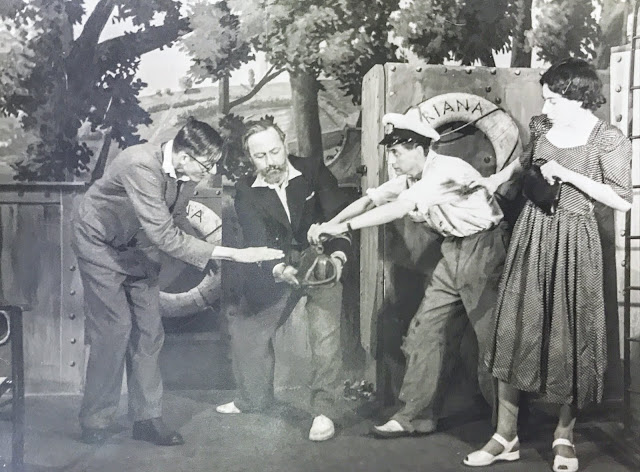 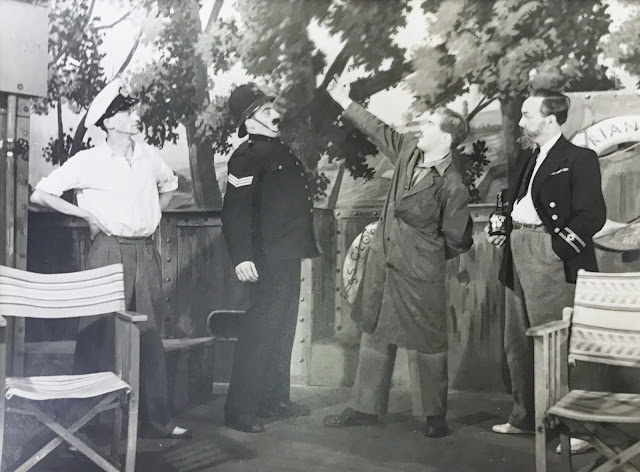 Any names to go with these faces? All taken from the School play Bees on the Boatdeck 1953
Posted by The Archive King at Friday, May 12, 2017 2 comments:

I bring sad news of an old boy of Purley, who I have just learned has passed away at a ridiculously young age.

Gary was at Purley between the years above. He was also my near neighbour, living just 5 houses away. When his mum passed away he was just 10, and for my teenage years became almost one of the family as his father was in the police force and worked shifts. I was 2 years above Gary at Purley.

From Purley, Gary went to Nottingham University and studied mathematics, graduating in 1981 or 1982. From there I know he spent some time in the United States but after around 1985 we lost contact. He ended up in Dover, Kent and passed away on 9th May 2014. He was just 54. More than this I simply dont know so if any other readers of Fas et Patria know any more information than this, I would be really interested in knowing."

Purley school for boys in 1952 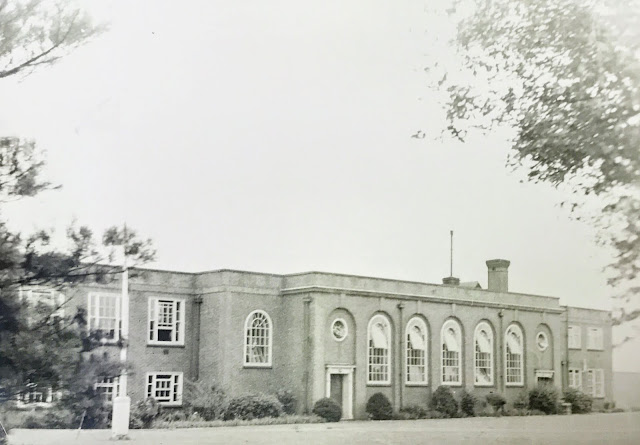 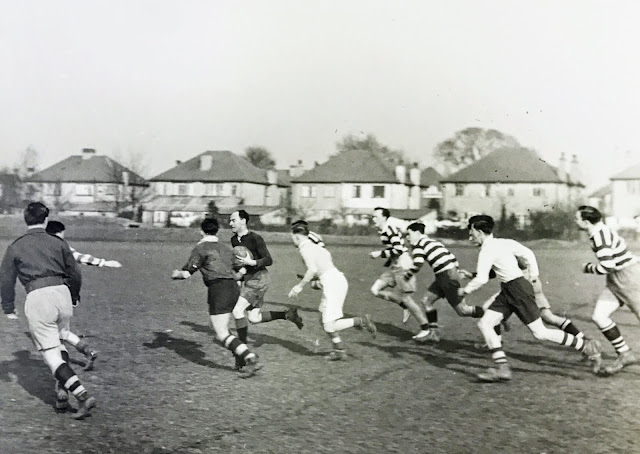 I am sad to have to pass on the sad news that two stalwarts of PGS have passed away.

Mike Fleming was a regular wing for the club until his work took him overseas. When he returned he was a regular at the home match lunches. His funeral will take place on Monday 22 May at the Randalls Park Crematorium in Randalls Road, Leatherhead, KT22 0AG and the family hope to see his old friends there.

Dudley Broster left school and went straight into the Canadian Airforce where he flew fast jets for 12 years coming back to the club for the odd game. After a short stay with BEA he joined Cathay Pacific as a captain of long haul jets and lived it up in Hong Kong. When Branson formed Virgin Airlines Dudley was their first pilot. His first job was to interview air crew. Dudley lived life to the full. His funeral is to be just a family affair.

John Hanson writes "I knew Dudley quite well, and when was posted to UK (whilst in the Canadian Air Force)  he would bring me quarts of spirits (gin and whisky) because he had access to the American PX (rather like the UK NAAFI) - these bottles cost 15/- (shillings = 75 pence!).  He took me up to London once to a secret place in the Charing Cross road.  It was a drinking establishment giving top class entertainment place to all USA and Canadian military personnel  - all free except drink. One could only get in by knocking on a panel of a door - it opened and the code word for entry was "Mama Sent Me"   Those were the days!"