Purley Boys only BBC Sports Personality of the Year

Former old Purley Boy Gordon Pirie was the BBC Sports Personality of the Year. Here is a video of him.
GORDON PIRIE VIDEO
"In 1955 Pirie won the BBC Sports Personality of the Year award. During that year he had beaten Emil Zátopek the triple gold medallist in distance running at the 1952 Olympics.[1] Pirie was an exceptional cross-country runner, winning the English Championship three times Pirie broke five world records in the course of his career, his annus mirabilis being 1956, when on 19 June in Bergen, Norway, he ran 13:36.8 for 5,000 m, beating Vladimir Kuts (USSR), and knocking 25 seconds from his own personal best. On 22 June in Trondheim, Norway, he beat the world 3000 metres record with 7:55.5, and on 14 September, in Malmö, Sweden, he set a new record with 7:52.7." Haven't been able to find any photos of him out running George Nicholson over Farthing Downs - anyone got a photo of him at school ? Get in touch via the comments box below.

John Hanson writes "I knew Gordon Pirie fairly well (born Gordon Douglas Alastair Pirie)  In early days he was known as "Doug".  He was 1 yr. ahead of me at school.  There were 3 "Pirie's" at school, all of them on the cross country trophy - Ian, the oldest, Peter the next and Gordon the youngest. In their time P and G "collected" the high jump honours on Sport's day.  I knew that Peter always beat Gordon in any running event.     I won't bore you, but I had reason to talk to Peter on the phone (lives in Toronto).

In conversation I remarked that I thought that he always beat Gordon at school;  his response was "and afterwards!"
Mr Sister was at school with Pam Pirie (The Girl's School)  They all lived at the bottom of Chaldon Way.  Father was Alick Pirie,  former Scottish International.  I often saw him running about Old Coulsdon.  Finally Gordon once helped me with my Applied Maths homework and showed me how to throw the Discus!"
Posted by The Archive King at Monday, August 26, 2019 3 comments: 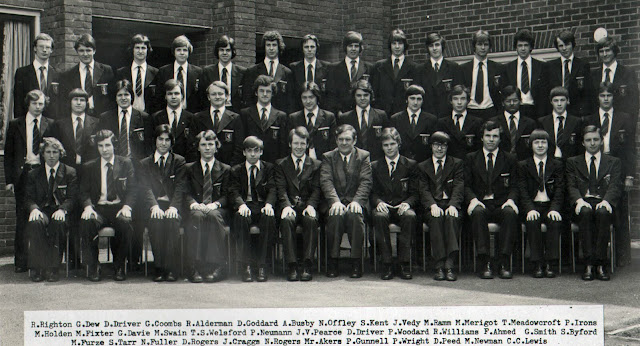 click the photo to see it full size.
Posted by The Archive King at Tuesday, August 20, 2019 No comments: 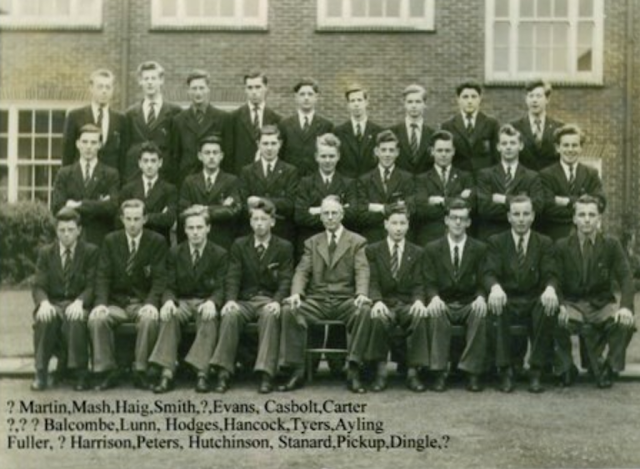 Posted by The Archive King at Wednesday, August 14, 2019 No comments:

"We held our reunion (pt 2) yesterday at the Zedel in Central London. I am attaching a photo which I hope you can access. Seven of us this time - left to right in the photo, Neville Crofts, George Rattray, Peter Dewey, Myself, Mike Finnis (who was unable to attend the previous reunion), Terry Smith and Philip Odell. By a strange coincidence, four of us - Pete, Mike, Philip and I - also attended the Paris trip in 1965 with GP and AP and there is a b & w photo on Fas et Patria (Ed's note- see below) of us in full school uniform looking  extremely bored (which we were) in the heat at Fontainebleau. Perhaps it might be possible to publish this as well as my photo from 54 years later. The London underground reminded me of Fontainebleau!

In the 1968 photo ( bottom ) L to R Dave Franks (standing), Pete Dewey, Adrian Fothergill (fair hair), me, Miles Chapman, Philip Odell and Mike Finnis. Those also in the 2019 photo at the Zedel are Pete, Philip, Mike and myself. Not bad going after a gap of 54 years! 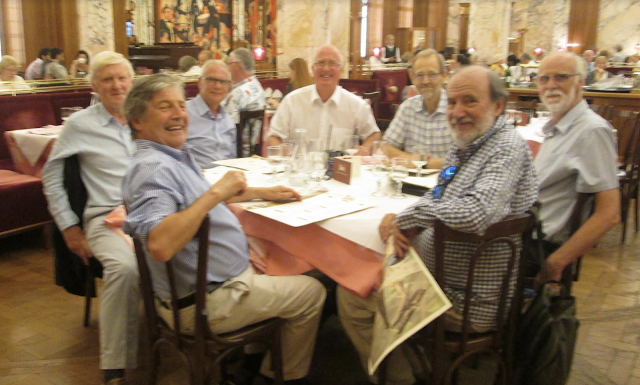 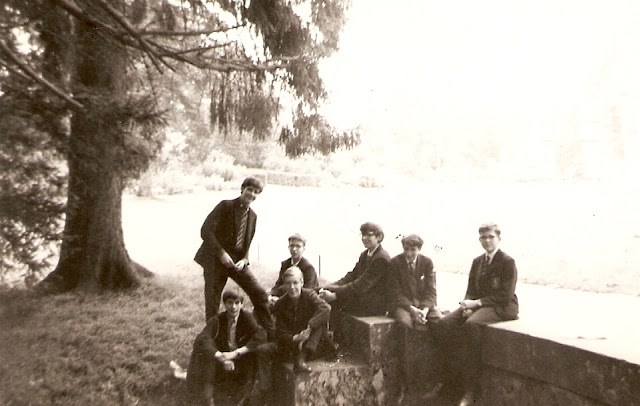 Posted by The Archive King at Thursday, August 01, 2019 No comments: